Raid Shadow Legends Spider’s Den boss also known as Skavag (Spider Queen) summons 2 Spiderlings whenever your champion gains an Extra Turn or begins his turn. A maximum of 10 Spiderlings can be summoned in a battle. The Spiderling is able to inflict two 5% Poison debuff on your champion. When multiple Spiderlings attacks a specific champion, they can stack up to 10 Poison debuff which deals 5% of Champion’s MAX HP as damage. This can easily wipe out your most tankiest high HP/Defense champion. Skavag the Spider Queen will heal herself to full health and increase her damage when she consumed her Spiderlings. The longer the battle is dragged on, the Spider Boss grows stronger and eventually wipes out your team.

How much Accuracy required to inflict debuff on Spider?

You need up to 225 Accuracy stat to inflict debuff on Spider and Spiderlings for all dungeon stages. An easy way to calculate the total Accuracy required for specific Spider dungeon stage is to get enemy’s Resist Stat + 25. Spider Stage 20 has 200 Resist, add 25 to it to get a total of 225 Accuracy. You can find the the Resist stat for each dungeon in the Spider Stats section! Alternatively, multiply Dungeon Stage with 11 (e.g. Dungeon Stage 20 x 11 = 210 Accuracy).

How much Resistance required to avoid debuff from Spider?

You need up to 300 Resist stat to resist most of debuff from Spider and Spiderlings for all dungeon stages. An easy way to calculate the total Resist required for specific Spider dungeon stage is to get the enemy’s Accuracy Stat + 100. For example, Spider Stage 20 has 200 Accuracy, so you add 100 to it to get a total of 300 Resist. You can find the the Accuracy stat for each dungeon in the Spider Stats section!

Chances of Resisting and Applying Debuff on Spider

Here is a table of Spider Stage 20 stats (Accuracy=200, Resist=200) displaying the chances of resisting Poison debuff from Spider and chances of applying debuff on Spider.

How to defeat Spider and her spiderlings?

In early stages (Spider’s Den Stage 1-14) you can easily counter Spiderlings by killing them with AoE damage skills before they begin their turn. You can use your starter champions such as Kael, Athel, Elhain or Galek to deal the AoE Nuke damage. They are best paired with an AoE Decrease Defense champion such as Warmaiden, Armina or Stag Knight to maximize your damage output!

However, as you progress further (Spider’s Den Stage 15-20), AoE damage skills could not defeat them easily as they have significantly more HP and Defense. The best strategy to solve this dungeon is to use skills that deals damage based on ENEMY MAX HP. The champions who are commonly used in Spider’s Den for this ability are Coldheart, Royal Guard and Husk. As usual, you will need to pair these nukers with AoE Decrease Defense and AoE Weaken debuff champions for maximum damage ouput!

You could also use Poison Detonation aka Poison Explosion on enemies to deal damage based on Enemy MAX HP too! Champions who are able to perform this ability are Karam, Zavia and Elenaril. You will need to pair them with an AoE Poison debuffer such as Taurus, Bad-el-Kazar or Tomb Lord. To increase the amount of Poison damage, you will need a supporter who can Increase Debuff Duration of the Poison such as Flesh-Tearer. Poison Explosion does not need AoE Decrease Defense nor Weaken debuff champions as the damage dealt it pure damage (ignores 100% Enemy Defense!)

For higher dungeon stages (Spider’s Den Stage 21-25), Enemy MAX HP damage will be capped due to the new passive skill implemented on bosses above Stage 20. Hence, the recommended approach is to use AoE HP Burn debuff to defeat Skavag the Spider Queen. This strategy is also applicable for lower dungeon stages (Spider’s Den Stage 15-20). Use Stun or Freeze to prevent the Spiderlings from attacking.

This Decrease Turn Meter strategy can be combined with the strategies mentioned above to prevent the Spider boss from taking her turn by consistently and promptly reducing her Turn Meter. The best champions for this Decrease Turn Meter role are Lyssandra, Jintoro, Coldheart and Armiger. It’s recommended to include a Decrease Speed debuff champion to crowd control the enemy easily.

This support strategy relies on resetting or reducing the skill cooldown of allies to enable them to execute their nuke attacks promptly. Pair your AoE nukers or AoE Crowd Controllers or AoE HP Burn with Renegade or Prince Kymar unleash their full potential!

How to surive against Spider and her spiderlings?

Use AoE Shield champion who can apply massive Shield on your allies such as Miscreated Monster, Valkyrie, Sir Nicholas and Helior to protect your squishy champions against the Spiderling Poison debuff and Spider boss AoE Nuke!

To prevent the spiderlings from taking their turn to bite and poison your allies, use AoE Stun and AoE Freeze champions such as Miscreated Monster, Crypt-King Graal, Scyl of the Drakes, Achak the Wendarin. This crowd control approach can be used in combination with offense strategy such as AoE HP Burn and AoE Nuke Damage to keep your team alive during the battle.

Use a weak affinity champion who has an AoE attack on their default skill. Spiderlings will auto-attack weaker affinity champions since they are easy target to kill as they will deal +30% more damage. Equip them with Lifesteal Set and have Warmaster (Tier 6 Offense Mastery) and Retribution (Tier 5 Defense Mastery), so they can retaliate enemies whenever they lose 25% of their health and replenish their health quickly with Wawrmaster damage as it deals damage based on Enemy MAX HP! The common champions used for this strategy are Sinesha, Zephyr Sniper and Basilisk.

Skavag the Spider and Spiderling Stats

Stats of Spider and Spiderlings based on dungeon stages. 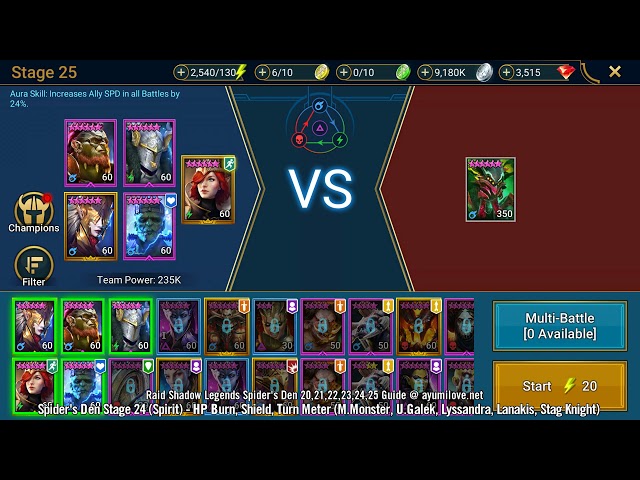 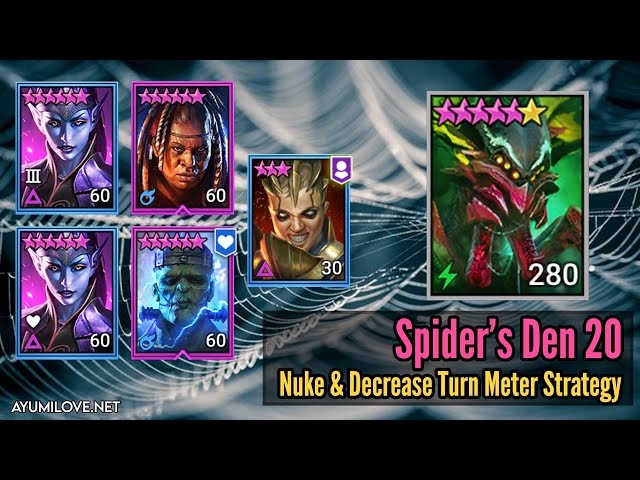 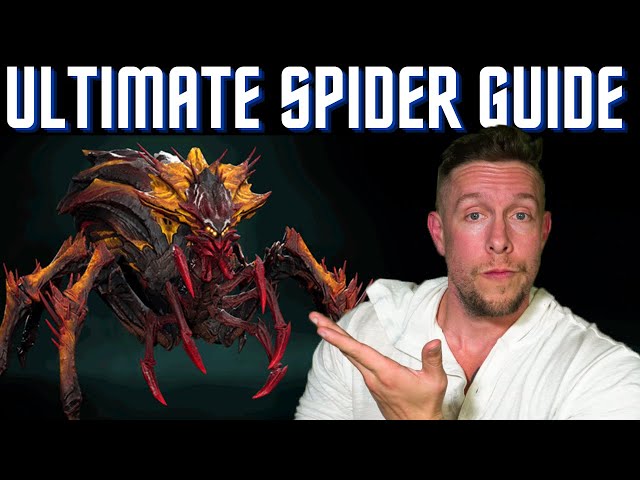 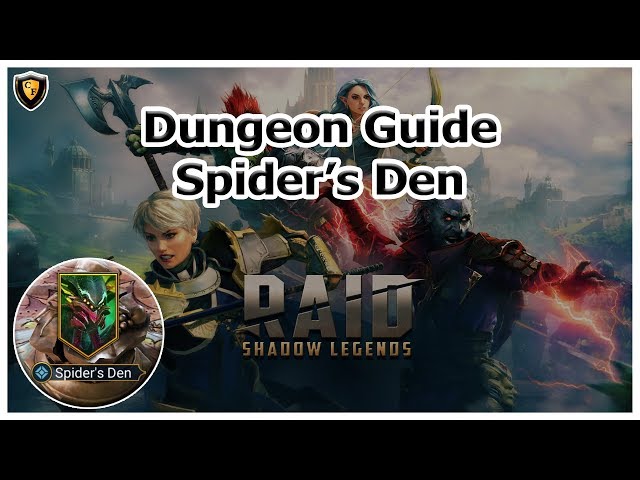 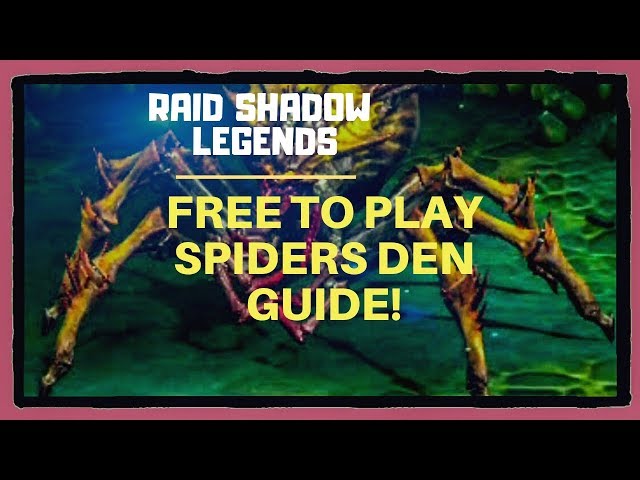 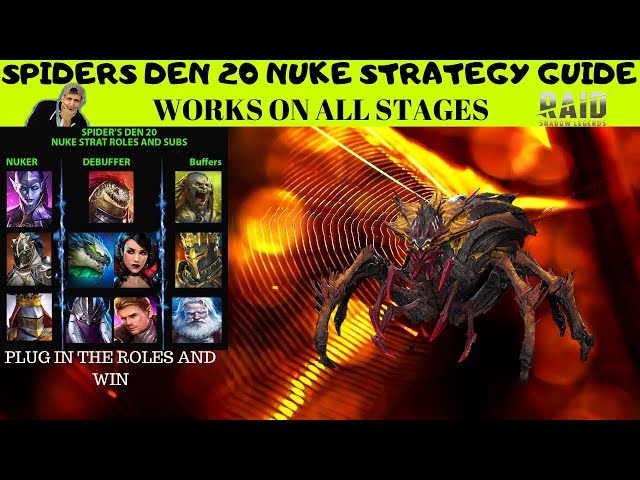 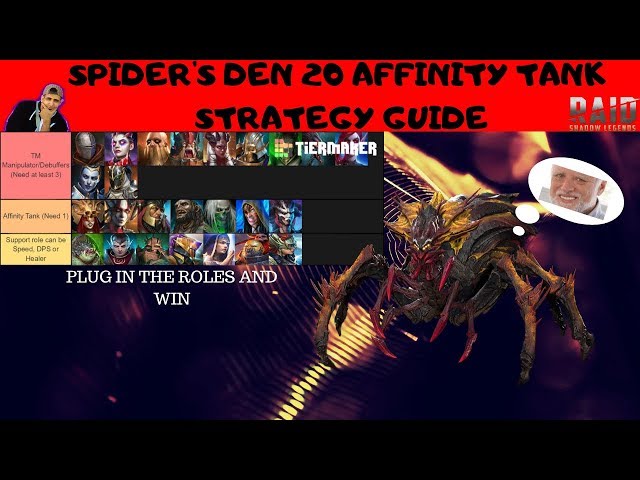 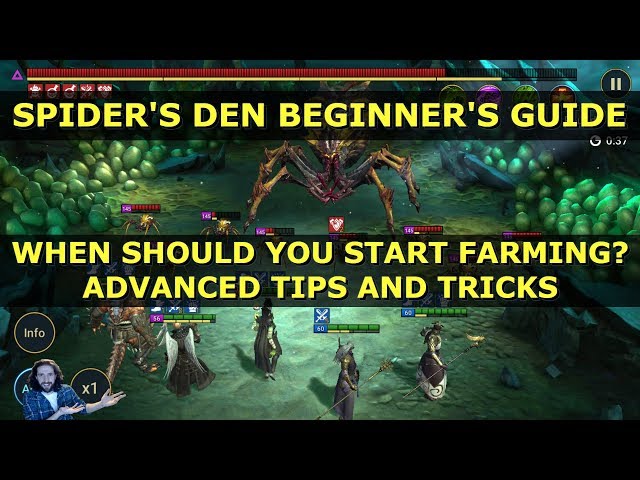 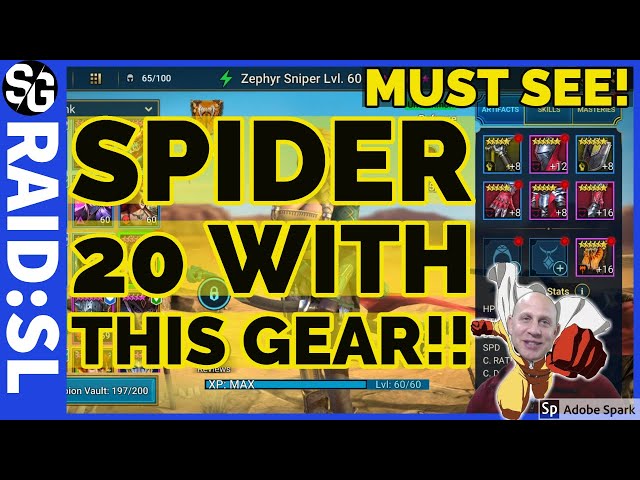