Scyl of the Drakes Review

Scyl of the Drakes is a Legendary Defense Magic champion from Barbarians faction in Raid Shadow Legends. Scyl of the Drakes was released in Patch 1.13.5 on March 2020 as Daily Login Reward on Day 180. She is an amazing champion who offers various utilities such as AoE passive heal, AoE stuns, Decrease Turn Meter, Decrease Speed and revive fallen ally. All of these skills make her a great carry from early-mid-late game!

Drake’s Swiftness is her default attack that has a chance to apply Decrease Speed debuff and Decrease Turn Meter on a single enemy. This is fantastic against Spider and Fire Knight bosses who are susceptible to these effects. By pairing Scyl the Drake with other Decrease Turn Meter champions such as Armiger, Alure and Coldheart, you can prevent enemy from taking a turn!

Wingbeat Flurry (A2 Skill) is Scyl’s crowd control ability where she attacks all enemies on the battlefield with a chance to apply Stun on them! This prevents enemies from taking their turn to attack your champion and inflicting any deterimental debuff or instant negative effects that could reduce your team survivability or battle efficiency. In addition, it allows to buy some time for your champions to recuperate and cycle through their skill cooldowns.

Phoenix Rite (A3 Skill) is her single-target revive ally skill, which is useful in reviving a fallen ally and granting them with an Ally Protection Buff, so that they will be able to survive enemy attacks to take their turn to perform their ability. Having a dedicated skill for reviving champions is extremely beneficial since the Champion AI will only use it during emergency cases.

Boundless Life is Scyl of the Drake signature skill that passively heals all allies by 10% of their MAX HP and applies an Increase Speed buff to a random ally whenever she takes her turn! When Scyl of the Drake is equipped with Relentless Set, she has a chance to take multiple turns within a single turn to heal all allies swiftly. Apart from that, she can be built as a tanky champion and high speed regeneration by pairing her passive skill with Regeneration Set and Immortal Set for a total of 28% HP Recovery per turn! This enables her to solo Celestial Griffin and Scarab King easily!

Overall, Scyl of the Drake has fantastic skill kit that makes her versatile in many areas. I highly recommend to 6-star her as she can carry your team and bypass many roadblocks that you may encounter when going through higher difficult stages of the game!

Scyl of the Drakes Skills

Boundless Life (Passive)
Heals all allies by 10% of their MAX HP at the start of each turn. Also places a 30% [Increase SPD] buff on a random ally for 2 turns.

Scyl of the Drakes Equipment Guide

Scyle of the Drakes Mastery Guide Scyl of the Drakes Reference

Scyl of the Drakes All-Rounder Build

Below is a reference of the artifacts equipped on Scyl of the Drakes that makes her useful in all areas of the game. Scyl of the Drakes is equipped with Relentless Set to enable her to get multiple Extra Turns so she can heal her allies using her passive skill “Boundless Life” for every turn she takes! In addition, it helps to reduce all her skill cooldowns quickly and allow her to reapply the Stun debuff on the enemies before they have a chance to retaliate. The equipment prioritizes a high amount of SPD, ACC, DEF%, C.RATE and HP%. This build works well in Doom Tower Easy and Hard mode against Bosses such as Celestial Griffin and Nether Spider. 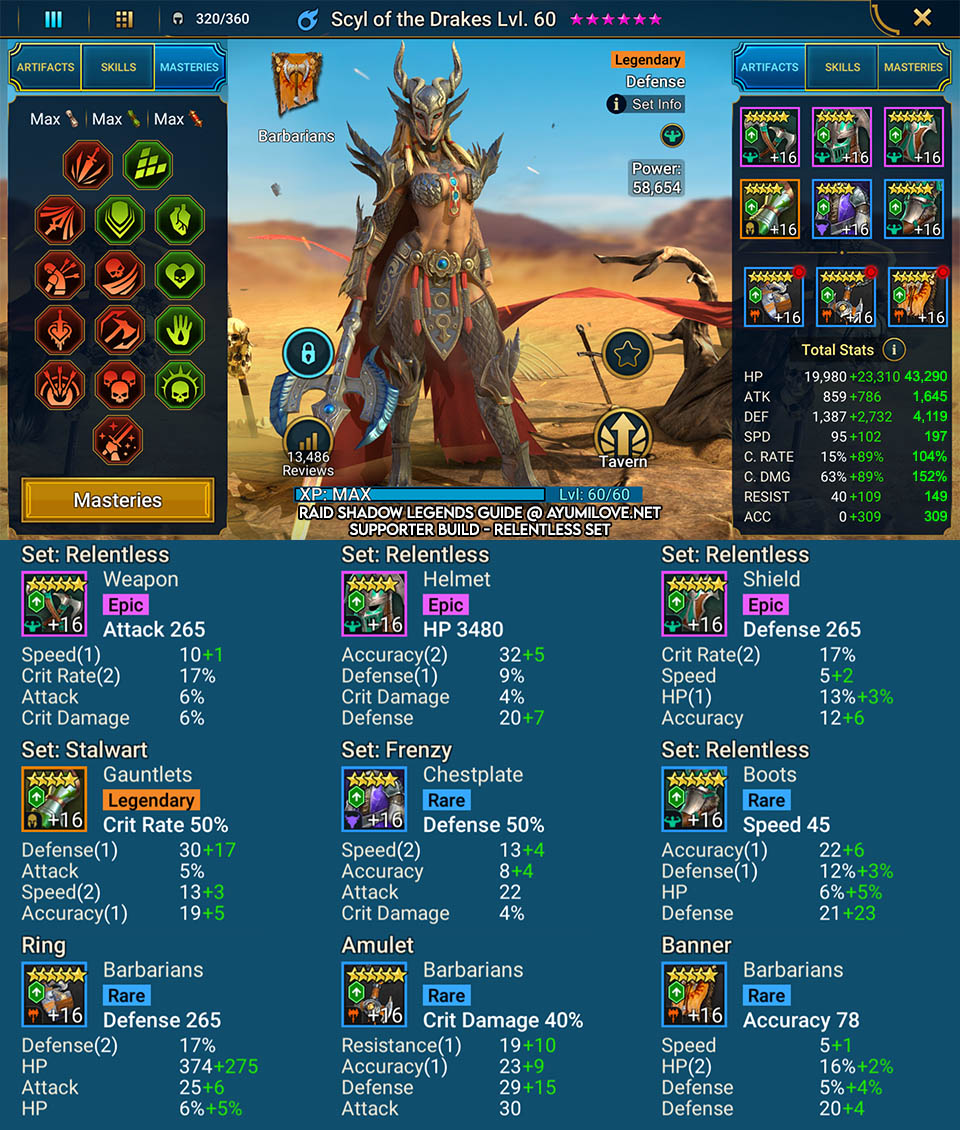 Scyl of the Drakes Storyline

Scyl of the Drakes is a terrifying force to behold on the battlefield. Her ranseur glittering in the sunlight as it whistles through the air in brutal swipes and swings, her dragonscale cloak billowing behind her, Scyl cuts and imposing image worthy of a true Warrior Queen. Her foes reel and break, unable to match her fury, while her allies find themselves invigorated in her presence, their fatigue and pain banished by the blessings of the Phoenix. Once, Scyl was nothing more than a terrified girl, orphaned by ruthless Knights Revenant cultists who razed her home village to the ground and slaughtered its inhabitants. Scyl alone managed to escape, but she was merely a child trapped in the Deadlands with nary a hope of survival. She should have died there, but providence intervened. The Disciples of the Drake, a dragon-worshipping troupe of outcasts and exiles, found Scyl when she had already lost consciousness from dehydration and hunger. They brought the girl to their hideout and nursed her back to health. In turn, she was sworn into the troupe’s service, though it soon became apparent that Scyl’s talents lay not in cleaning and cooking and tending to the myriad everyday needs of the camp, but rather in the art of battle. The Disciples were not numerous, so any fresh blood was welcome among their warriors, and Scyl had proven herself both capable and passionate. She bested all of her peers and many opponents older and more experienced by the time she came of age, swiftly taking her place among the raiding parties and earning her share of glory in uncompromising hit-and-run attacks against Orcs, the Undead, and Knights Revenant parties venturing into the Deadlands. In due time, she rose to command a small band of young warriors of her own, which grew along with her reputation. Scyl’s reckless courage led her to many victories over the course of several years, but it almost cost her everything as well. When a large Knights Revenant raiding party had been discovered camping among the desiccated cliffs of the Gronfang Ravine, Scyl, blinded by hatred, ordered an attack regardless. Her warriors and she were outnumbered, but they had the element of surprise on their side and struck under the cover of night. With stones cast from cliff crests and skirmishers moving among the rocks like vengeful spectres, Scyl’s warriors rained death down upon the foe. But the initial confusion passed and cultists threw themselves into the fray with maddened fury, pressuring the Disciples with sheer numbers and ferocity. Scyla fought in the first ranks, as she always did, even as her warriors fell around her. Though wounded and bruised in the brutal melee, she cut her way through to the armour-clad dark priest who led the Knights Revenant force. They clashed beneath the starlit skies of Krokhan, and steel met steel. For several minutes the duel lasted without either combatant gaining the upper hand, yet soon cultists started flocking in to assist their leader. Cutting them all down cost Scyl precious time and strength. In the end, she missed a mace stroke that shattered her ribs and left her gasping for air on the sand, her foe preparing to deliver the deathblow. But Scyl was not a warrior to give up even in direst of circumstances. In the final moment, she managed to reach for her spear and thrust it through the priest’s dark heart, sending him back to his twisted Master. Silence had fallen over the ravine; apart from Scyl, no soul remained alive amidst the cliffs, and even she felt life ebbing away from her body. Vengeance and bitter triumph remained her only companions at that moment, but she was not destined to die. Unbeknownst to her, a powerful djinn observed the battle from afar, and so impressed it was with the young woman’s brazen skill that it deigned to appear in the aftermath of the slaughter. Wreathed in flame, it took the guise of a Phoenix and spoke unto Scyl the words of praise and blessing. She received a small fraction of its magic, her wounds mended before her very eyes. The spirit vanished, leaving nought but an exquisite cloak of dragonscale in its wake – a final gift it wished to bestow upon the warrior who had impressed it so. Scyl spent the day giving proper burial rites to her fallen warriors and returned to the troupe alone, where she was hailed as a heroine. Her reputation grew and, after numerous battles, she rose to lead the Disciples of the Drake herself. To this day they remain a force to be reckoned with in the Krokhan Desert, and servants of Siroth avoid straying into their territory lest they incur the wrath of Scyl of the Drakes.

Scyl of the Drakes Updates

Scyl of the Drakes Videos 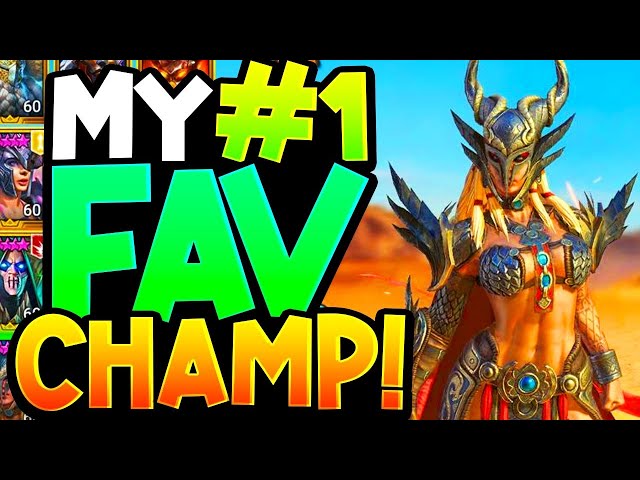 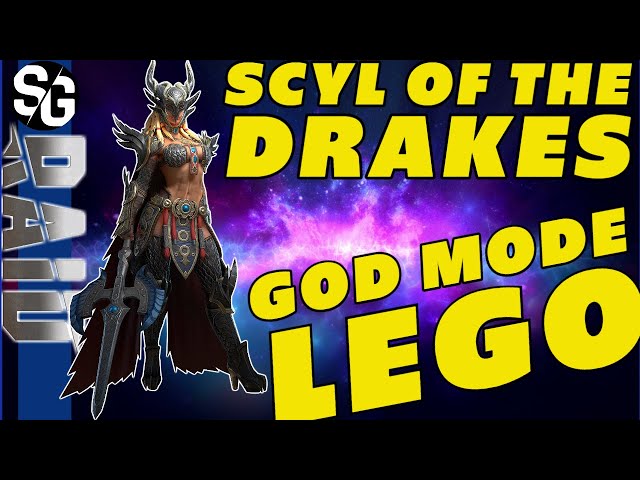 78 thoughts on “Scyl of the Drakes | Raid Shadow Legends”