Mass Murder [Passive]
Increases this Champion’s ATK by 10% each time they use an Active Skill (stacks up to 100%). Resets each round. Renowned for their ferocity, the Orc tribes that make their home in the lands surrounding Felwin’s Gate have long established themselves as a force to be reckoned with. They often roam the trade routes and plains as brigands or fight as mercenaries for those who can afford their services. Such was Varl – the leader of a vicious band of sellswords whose infamy grew with every village he had put to the torch.

His authority over the ragtag force of Gaellen Pact warriors seemed unshakable until the day an enigmatic Gnarlhorn shaman arrived and roused the Skinwalkers under Varl’s command to mutiny. They abandoned their posts and made it north, into the lands of Aravia. Enraged by this news, Varl turned the entire band and pursued the deserters with ruthless determination. The two forces clashed, and many Skinwalkers fell in that skirmish, yet the Shaman escaped further north with a handful of his followers.

Varl followed the trail like a ravenous wolf, hellbent on meting out vengeance for the insult he had suffered. He eventually overtook the traitors in an ancient grove somewhere in the southernmost reaches of High Elven lands and fell upon them, assured of a swift victory. However, the Shaman had already found what he wanted – an ancient artifact that lay hidden at the heart of the grove. He conducted a terrible ritual in the name of Siroth and imbued his fighters with the power of Darkness. A battle ensued, hard and bloody; though the Skinwalkers were outnumbered, their unnatural resilience and strength tipped the scales. Varl realized that his Orcs were losing heart and would soon flee the field.

Not one to simply accept defeat, he ordered to set the trees ablaze in hopes of taking his foes with him. That gambit saved Varl’s life, for the source of the Shaman’s power perished in flames, and the tide of the battle turned once more. Orc mercenaries surged forth and hurled the Skinwalkers into the raging inferno, while Varl himself slew the Shaman in single combat and claimed his skull as a trophy.

Victorious but gravely wounded, the chieftain ordered his remaining forces to retreat. Alas, fate had one last cruel joke to play at Varl’s expense: a host of High Elves of Aravia fell on his trail, summoned to investigate the battle that left a sacred grove of Lumaya in ashes. To them, Varl was a brutish savage responsible for that sacrilege. Negotiations were not an option, and the Orcs had no strength to resist.

Salvation came unbidden. A flame-haired woman known as the Arbiter intervened, offering Varl a chance to save his kinsmen and atone for his crimes. Rather than perish by blade or arrow, he would become an immortal guardian of the Doom Tower – a prison the Arbiter had built for Teleria’s most dangerous monsters. It was a grim duty that Varl accepted, but it was his only chance to redeem himself. Perhaps one day, a hero will come and vanquish the evil of the Doom Tower forever. Until then, Varl the Destroyer stands guard, as he had for centuries. 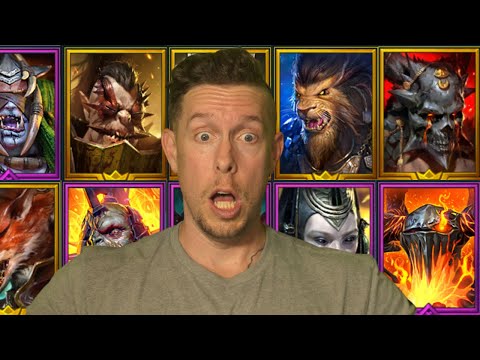 One thought on “Varl the Destroyer | Raid Shadow Legends”