Awaken Chaos Era is a turn-based, mythical-themed, role-playing gacha game, which can be played on mobile (Android and iOS) and PC (emulator). Players will need to form a team of heroes to battle the enemy. There are 10 Adventure Chapters with 3 difficulties (Normal, Hard, Mythic) with the storyline, 10 Dungeons to farm gear and Hero skills, 2 challenging dungeons to test your team synergy (Void Tower and Endless Trail), and raid Guild Bosses to earn amazing daily rewards.

Download Emulator: LDPlayer (Play Awaken Chaos Era on PC!)
Note: The LDPlayer has Google Playstore where you can download and install Awaken Chaos Era!
Tips: Do checkout the LDPlayer Promo Tab as they occassionally give free Advanced Summoning Shards!

There are 155 heroes in the game, each has its own elements (Fire, Water, Wood, Light, Dark), roles (Offense, Defense, Support), rarity (Common, Rare, Elite, Epic, and Legendary) from 8 factions (Holy Light Empire, Crisas, Lasir, Soulplunders, Sylvan Woodlands, Titan Icelands, Free Cities and Dragonscale Marsh). You assemble a team of heroes to battle in Arena, Adventure, Dungeons, and Incursion (Guild Boss), so you can farm resources to upgrade your hero skills, stats and get better gears. Each Hero has their own unique traits and abilities that synergize with other heroes. You will need to experiment to find the best synergy to build a powerful team!

There are 12 dungeons in the game grouped in 5 main areas (Endless Trial, No Man’s Land, Arcane Dominator, Void Tower, Bounty Hunt). No Man’s Land contains 5 dungeons where you farm hero gems to upgrade hero skills for your Fire, Water, Wood, Light and Dark element heroes. Arcane Dominator contains 5 dungeons where you farm hero gears of special types. Void Tower is a special dungeon on its own where you need to clear each floor to earn Stardust to perform Limited Summons. Endless Trial is similar to Void Tower but allows you to choose different floor paths to reach to the end of the destination and earn Trial Token. This token is exchanged for goods at the bartender’s tavern.

The Arena is the place where you battle against other player team champion setup and rank up in tiers. The Arena Tier is divided into 5 Tier groups (Legend, Diamond, Platinum, Gold, Silver, Bronze). Each Tier Group has a limit of players who can reside within it. In addition, each tier group has its own specific rewards (Advanced Summon, Pumpkin, Gold, Ancient Summoning Crystal, Diamonds, Awakening Soul Arcana, Hierarchy Soul Arcana) that are handed out when the season ends (every 7 days). Arena Pass is required to participate in the Arena match. You gain Bread (Energy) and Arena Token (currency to exchange items in shop) regardless of whether you win or lose! Just that you won’t go up nor down in Tier if you lose the battle. You only gain points for every winning match in Arena to go up in Tier! Arena Pass is automatically added to your resources every 1 hour similarly to Energy.

You can get help from your friends to complete some of the difficult dungeon challenges to earn an additional reward! In addition, you can use their support hero to clear difficult areas in Adventure if you get stuck in any areas due to a lack of heroes in your account.

You will need to clear Adventure 2-8 (Storyline Chapter 2 – Chaos in Crisas) before you can get to choose a free Legendary Hero to aid you in your game progression! The game will provide you with 5 options upon completing that Adventure stage. 3 of the options contain 1 Legendary Hero with 4 Elite Heroes while the remaining are 2 Epic Heroes with 3 Elite Heroes. 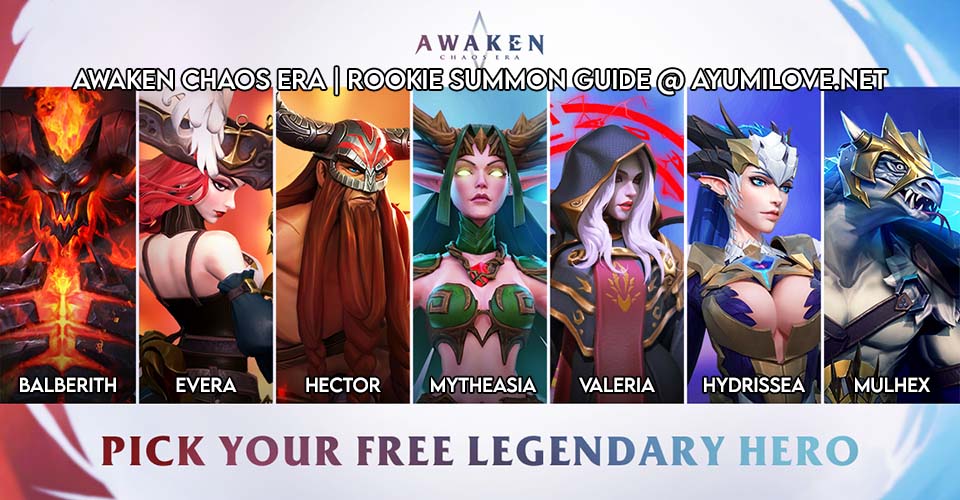 Which Legendary best for game progresion?

The tips below are based on my experiences playing as a F2P (Free to Play) player. P2W (Pay to Win) players will have an easier way route since the roadblocks can easily bypass by purchasing offer packs from the shop to quickly promote Hero or gain better Legendary champions.

Tip #1 : How to progress in Awaken Chaos Era

Don’t start playing before reading this!

Tip #3: How to spend the XP Jelly efficiently?

Tip #4: What should I spend my diamonds on early game?