There are 12 unique hero stats Awaken Chaos Era. In this guide, I’ll go through each of them explaining the stats purpose to help you in your game progression on equipping your heroes with the best compatible gear stats based on their role! The stats that all hero has are Attack, Health, Defense, Speed, Critical Rate, Critical Damage, Focus, Resistance, Agility, Precision, Dodge, and Accuracy.

The hero stats can be viewed by visiting Heroes section, then select a hero from your list. Next, click on the Info tab located on the right pane and click More to view all of their stats! The stats shown below is a total sum of the hero base stats, glyph bonuses and ascension. However, stats provided by traits or passive skills are not added into this equation such as Zatlux and Elson. 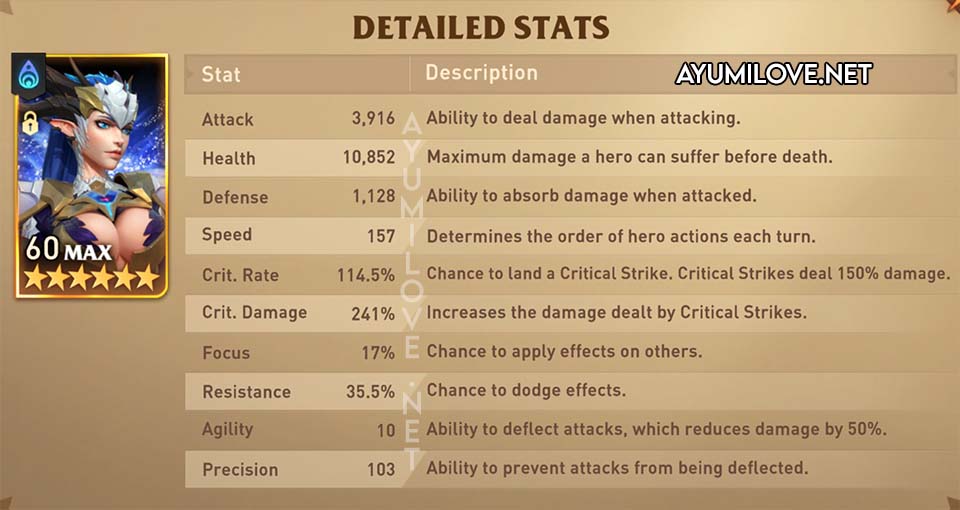 Attack stats allows you to deal damage when attacking an enemy or multiple enemies. The damage is calculated by having the Attack deducted with Defense in a certain percentage before reducing the hero’s health. Attack stats are important for Attacker heroes as their skills are mainly to inflict a massive amount of damage to bring down their foes. In addition, Attack stats is used to calculate the AoE damage inflicted by Smoldering Flames spell by combining the total Attack stats of your heroes in the squad!

Defense stats allows you to reduce the incoming damage before it directly reduces the amount of health on the hero. The damage reduction is calculated by having the Attack reduced by Defense in a certain percentage before removing a portion of the hero’s health. Some hero’s skills are based on Defense stats rather than Attack stats such as Charles. Hence, it’s important to read their skills carefully to identify the best approach to use them properly!

Speed stats dictates the hero sequence in the battlefield. The more speed stat your hero has over the enemy, then your hero can begin their turn first within that round. However, having an enormous speed gap between your hero and the enemy hero (e.g. 2~3 times more) does not enable them to lap the enemies multiple times within the battle round.

Critical Rate stats allows your hero to have a chance to perform a Critical Hit where the normal damage is added with the critical damage. The damage number will be shown as red to indicate a Critical Hit is being applied successfully. Critical Rate is an important stat for all Attacker heroes in the game to raise their damage output to knock out the enemies quickly to avoid them having a chance to recuperate from the attack.

Critical Damage stat allows your hero to deal a higher amount of damage through a Critical Hit. Critical Damage stat goes in pair with Critical Rate, so having zero or low Critical Rate does not allow you to take advantage of this stat to deal massive damage to your enemies. This stat is essential for most damage dealer heroes when attempting to raise their damage output other than increasing their Attack stats.

Resistance stat enables your hero to resist incoming debuff aka negative effects from the enemy to prevent them from reducing your hero’s offense and defense capabilities. When your hero’s Resistance stat exceeds the enemies’ Focus stat, then the negative effect can be resisted effectively. Resistance is important for supporter heroes to prevent them from being crowd controlled, so they can support their allies without any disruption.

Agility stat provides the hero the ability to deflect attacks. When the deflection occurs, it reduces the incoming damage by half. In addition, deflected hits cannot be Critical hits. This is another form of defensive stat along with Defense Stat to reduce the incoming damage from enemy attacks. Using heroes who are stronger element/affinity against the enemy by default raises their agility by a certain amount to benefit from this stat. It’s useful against very powerful nuke attacks, especially Guild Boss in a lengthy battle.

Precision stat provides your hero the ability to prevent the attacks from being deflected. It’s the stat that counters the Agility stat, similarly to how Focus and Resistance oppose one another. Having a high amount of Precision stat allows your hero to overcome the barrier of your hero fighting against a stronger element/affinity. However, if your hero exceeds the amount of the enemy’s agility, the excess Precision stat does not do anything to help improve the battle. The debuff that lowers the hero’s Precision stat is Precision Down.

Dodge stat allows your hero to completely avoid the enemy hit, which is a much better version of Agility. This stat is hidden from Hero’s Detailed stats. To increase your hero’s Dodge capabilities, you will need to rely on the hero’s skills to reduce the enemy’s accuracy, such as using Accuracy Down debuff.

Accuracy stat allows your hero to prevent the enemies from dodging your hero attack. This stat is hidden from Hero’s Detailed stats. To increase your hero’s Accuracy capabilities, you will need to utilize the hero’s skills to increase their Accuracy, such as using Accuracy Up buff.

Below is a list of hero stats along with a brief description to understand how it works!