Awaken Chaos Era Spells are used to support your heroes in PvE and PvP battle by increasing your team’s survivability or damage output to defeat the enemies quickly! There are 9 spells you can choose, which are Smoldering Flames, Gaia’s Renewal, Water Prison, Last Breath, Sundering Purgatory, Shield of Mercy, Stone Shackles, Rage Aura and Agile Leap. Some of these spells are unlocked by completing specific Adventure Chapter in the game! 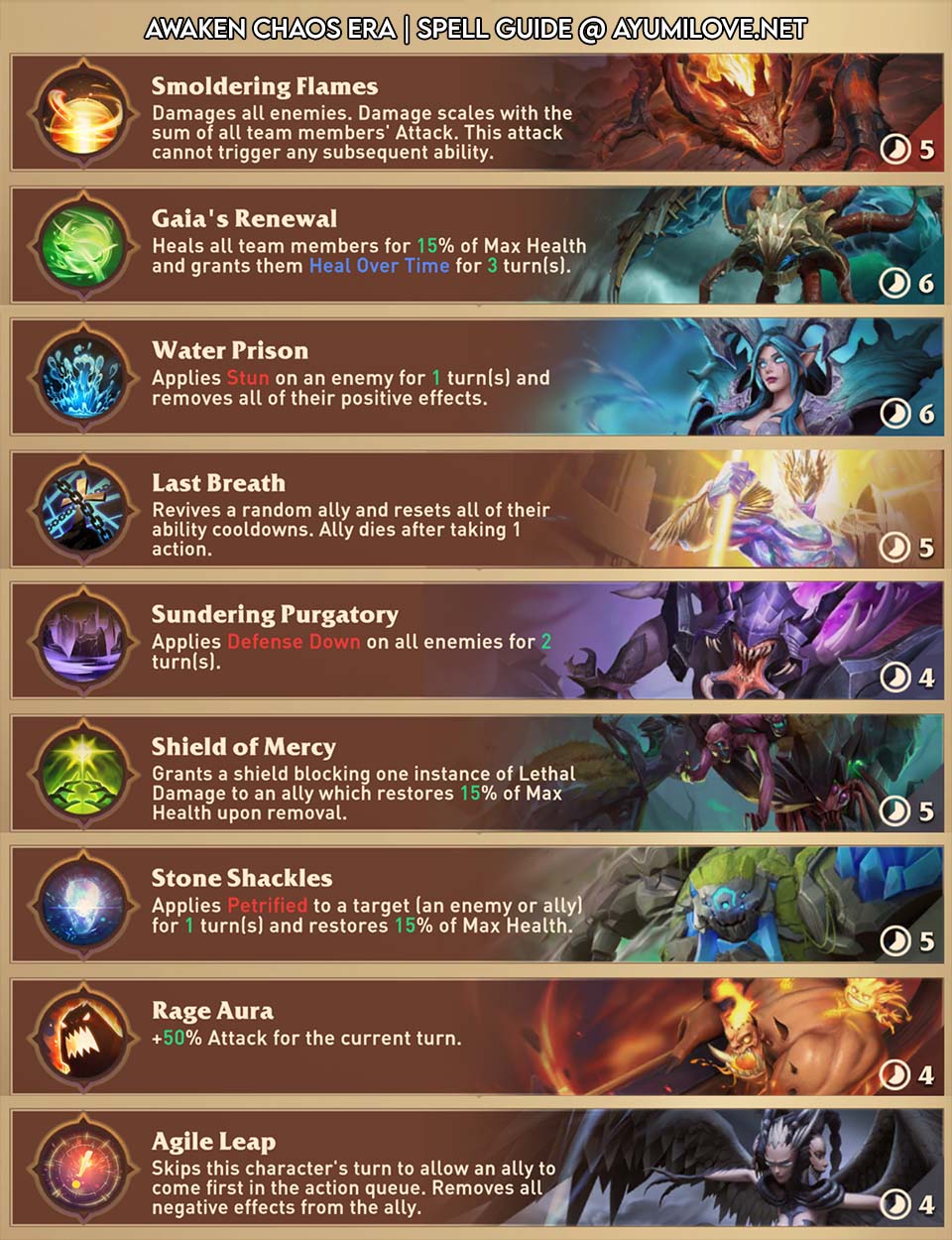 What’s the best way to use these spells?

Smoldering Flames spell deals AoE damage to all enemies based on the total of allies’ Attack stats. It’s the first spell introduced to players when exploring the chapters in Adventure. It’s recommended to use this spell with a team of attacker heroes to raise the damage of this AoE nuke attack. Smoldering Flames is also used to counter Mary’s AoE Invincibility ability in PvP Arena, so your AoE Attacker heroes will not waste to AoE ability dealing 0 damage to the Invincibility buff.

Gaia’s Renewal spell heals all allies and grants them Healing over Time buff, which is useful to sustain your team in lengthy battle such as raiding Arcane Dominator and No Man’s Land dungeon bosses, guild boss (Armored Incursion) or event bosses (e.g. Agulis). Use this spell as a supplementary healing along with your dedicated healer in your squad to improve the survivability odds of your heroes.

Water Prison spell stuns an enemy and removes all of their buffs. It’s useful against enemies who relies heavily on buffs to increase their survivability or boost their damage output, especially in Queen of Tides (Arcane Dominator Dungeon Boss). Water Prison is commonly used in PvP Arena to prevent the enemy’s damage dealer from nuking your team or stopping their suppor hero from buffing their allies.

Last Breath spell enables you to revive a random dead ally in the team, so they can perform their ability before dying. This is useful for short battles such as Arena (PvP) and Gemini Dragon (Arcane Dominator Dungeon Boss).

Sundering Purgatory spell is one of the common spells used to lower enemies defenses by applying AoE Defense Down before your Attacker heroes nuke them with AoE Attacks. If you do not have a dedicated AoE Defense Down hero such as William, then this spell helps in filing that gap! Sundering Purgatory synergizes well with a team of Speed Nuke Team for speed farming Adventure Mythic to gather EXP Jelly, Glyphs and Gold quickly while saving on your Double EXP Card.

Stone Shackles spell is a double-edge sword, which allows you to heal an enemy or ally by 15% of their MAX HP but makes them loses a turn by Petrifying them. If you have a cleanser in your team, you can use this Stone Shackles on them to heal and then remove the Petrifying debuff on them. If you are looking for a good healing spell, Gaia’s Renewal is much better in this aspect.

Rage Aura spell boosts all your heroes Attack stats in your team, so they can deal more damage within that turn itself. This spell is best used with a team of AoE Nuke Attacker Heroes and pair with Sundering Purgatory to deal maximum amount of damage to the enemies in the battle field. It is commonly used in Arena PvP to quickly defeat the enemies, so you can speed farm for Arena Tokens.

Agile Leap spell is a unique spell that allows you to skip a hero’s turn to enable the hero of your choice to take their turn first, while simultaneously removing any debuffs on them. Agile Leap is not commonly used in most battles except if you wish to manual the run such as Arena PvP or Guild Boss.

There are 2 ways of optimizing Agile Leap spell: