Mytheasia is a Legendary Support Wood hero from Sylvan Woodlands in Awaken Chaos Era. Mytheasia can be obtained through Rookie Summon by completing Adventure Normal 2-8. You can perform an Account Re-roll if you want to start with the best carry hero for end-game content! Her skill kit revolves around healing allies, remove negative effects, reviving slained team members and providing Shield to protect ally from dying.

Gift of Life is Mytheasia’s unique trait that allows them to recover health with any buff on themselves! This means you can pair her with other buffer heroes such as Brand, Joseph or Connor to get the similar effects of Heal over Time buff!

Life of Drain is her basic ability that attacks an enemy and grants a shield to the lowest health ally. Since the shield capacity is scales based on Mytheasia’s Max Health, it’s recommended to build her with high amount of Health, so the shield can mitigate the damage while your heroes recuperate safely with healing. Terra Set is an excellent gear to be equiped on Mytheasia when you begin your journey to clear the story chapters to reach Adventure Mythic.

Healing Force is her special ability that heals an ally and removes all negative efects from them. The downside of this ability is its not able to perform a quick recovery from enemy nukes as compared to Blackhorn’s AoE healing and cleansing. Hence, her trait makes up for this disadvantage by healing allies slowly with any buff they have on themselves.

Treant Synergy is Mytheasia’s ultimate ability that heals all allies and revives all slained allies. She is the only hero in the game who has this resurrection ability to keep your team alive throughout the battle as long as she is the last person standing! With this revive ability, you can build an end-game Arena Stall Defense Team to keep your arena ranking safely and clear difficult content such as Endless Trial, Void Tower and Bounty Hunt without having to worry your hero dying. Equipping her in Revival Set allows her to heal herself upon every turn in case she becomes the main target to be knock out of the battle first, especially in Arena!

Overall, Mytheasia is an excellent support hero who can carry you through end-game content with ease. If you chose her as your Legendary hero from Rookie Summon, you will experience a slower progression rate from early-mid game compared to having a powerful AoE nuker such as Hydrissea, Valeria or Evera. You can fill this gap by pairing Mytheasia with Zatlux, Nathalia and Joseph in your team as your Adventure speed farming team.

Gift of Life (Trait → Ascension)
The abilities of all team members recover (5% → 10%) of Max Health if the target has a positive effect.

Checkout the best build for Mytheasia with gears and stats!

The recommend stats to prioritize on Mytheasia are Health, Defense and Resistance to improve her survivability against enemy attacks when they try to target her to knock her down first before taking out the rest of your heroes. The best gear for Mytheasia is Terra Set as it boost her Health stats significantly as well as her AoE healing and Shield generated from her abilities. Alternatively, you can opt for Revival Set to enable her to sustain herself if she becomes the main target of the enemies when she becomes the last person standing in the battlefield. Mytheasia is a living legend, the “guardian angel of the Astral Forest”, High Priestess of the elves and protector of the Starlight Altar due to her mighty magicks and devotion to her land. In reality, Mytheasia is merely an elven mage although far advanced in wisdom beyond her peers due to her frequent conversations with their ancestral spirits through the Starlight Altar, and who have given her access to mysteries and forbidden arts beyond the understanding of most mortals. Such mysteries may perhaps hold the key to the Forest’s future… 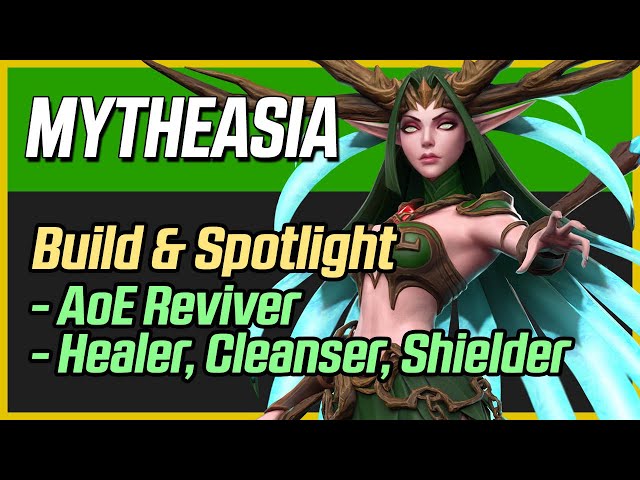