Bommal the Dreadhorn is the new boss in Doom Tower Rotation 3 in Raid Shadow Legends, where he has a variety of unique abilities that makes it a challenging battle! Bommal the Dreadhorn is able to place bombs on your champions, inflicts HP Burn debuff, remove your champion’s buff and summons Dreadbomb to deal massive amount of damage to your champions! He is one of the most difficult Doom Tower bosses as he have high amount of Accuracy and his bombs are unblockable and cannot be removed. Check out the guide below to learn more about his game mechanics!

Stats of Bommal the Dreadhorn and Dreadbomb based on Doom Tower floors and difficulty.
Tower Rotation 3 (Force): Floors 10, 50, 90

How much Accuracy and Resistance needed for Dreadhorn?

How much Accuracy required to apply debuff on Dreadhorn?

How much Resistance required to resist Dreadhorn debuff?

To resist Bommal the Dreadhorn’s HP Burn debuff and instant negative effect such as buff removal, you will need to have at least 250 Resist for Doom Tower Normal and 850 Resist for Doom Tower Hard. However, these Resist requirement can be halved by applying Decrease Accuracy on Dreadhorn, which means you can allocate stats to other areas such as Health, Speed and Defense to tank the damage dealt by him! In addition, you can also gain additional Resist stat by having a Resist Aura champion in the Leader position if you do not have many Resist substats on your artifact set or not having a Resist banner.

What are the main things to avoid on Dreadhorn?

Decrease Turn Meter will trigger Dreadhorn’s passive skill to summon Dreadbombs up to a maximum of 6, which will can wipe out your entire team easily!

If you do not have Decrease Accuracy on Dreadhorn and using a high resistance team, he will able to remove buff from your champions easily. For each buff removed, he will apply a Bomb debuff on them, which increases the damage dealt to your team!

Stacking high amount of Defense instead of HP

Dreadbomb suicidal attack and Bomb debuff ignores all defenses. Hence, it’s recommended to have approximately 2000~2500 Defense to mitigate the damage done by Bommal the Dreadhorn’s attacks, while the remaining stats are allocated to Health to tank the damage!

How to defeat Dreadhorn and his minions?

Bomb debuff doesn’t do a significant amount of damage compared to Poison debuffs when you are comparing them in a long sustain battle. Hence, the most efficient way to defeat Bommal the Dreadhorn is to use Poison champions to quickly dwindle his health. You could also equip your low resist champion in a Deflection Artifact Set to reflect the Bomb debuff placed by Dreadhorn! Alternatively, you could use Bomb champions if you already have them built or HP Burn champions such as Drexthar Bloodtwin where you can get him from Arena Bazaar!

You can’t kill the Dreadbomb as they ignore all damage inflicted by your champion’s direct damage from skills nor immune to all debuffs except to Freeze and HP Burn. They only way they receive damage is from their own kamikaze attack (suicidal attack that deals 100% MAX HP). Dreadbomb inflicts a consistent nuke damage based on your champion’s 40% MAX HP! However, their damage can be reduced by half if you apply Freeze debuff on them before they sacrifice themselves.

How to survive against Dreadhorn?

I highly recommend having at least a Reviver, Healer and Support champion who could provide additional survivability (e.g. Increase Defense, Strengthen, Increase Speed, Shield, Ally Protection). However, you will need them to be in high resist else the boss will easily remove their buffs!

Increase Buff Duration plays an important role in extending the buff duration of essential buff such as Block Debuff! Block Debuff prevents your champion from getting stunned whenever the Bomb debuff triggers upon your champion taking their turns. This allows your champion to be able to lower their skill cooldown without any disruption from stun debuff.

Vanquishing Boomal the Dreadhorn rewards you Dreadhorn plates, which are materials to craft Fortitude Artifact Sets in the forge! Having 2-piece set of Fortitude Artifact provides +10% Defense and +40 Resist! It’s a superior version of Resist Set that players usually farm them in Ice Golem’s Dungeon! 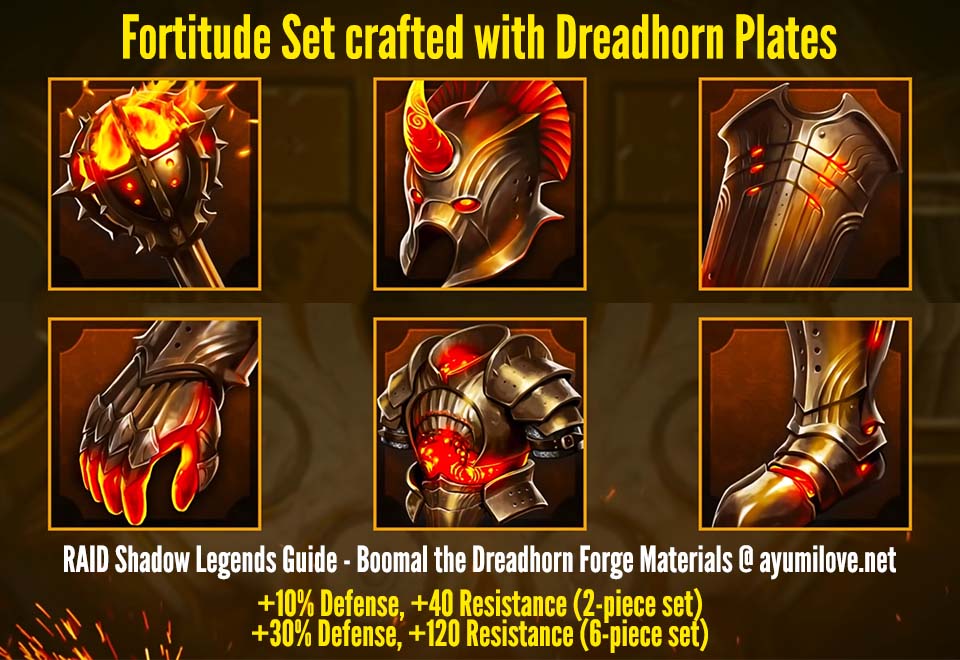 This strategy was shared by StewGaming on how Templar is able to solo Bommal the Dreadhorn in Doom Tower Hard (10, 50) and Doom Tower Normal (10, 50, 90). Templar manages to survive the Dreadbomb damage by buffing himself with Block Damage before they explode. Take note that his Taunt (A2 Skill) must have 4 turns skill cooldown for him to auto run the battle. Otherwise, you will need to manual run the entire battle. He needs to be equipped in Regeneration Set and Immortal Set to recover sufficent health to last for the entire battle! Templar requires to have at least 196 speed, 70K Health, 3K Defense to tank the damage. The additional speed can be achieve by having a Speed Aura champion in the lead and learning 2 masteries (Whirlwind of Death and Spirit Haste). In addition, he needs to be as low Accuracy as possible to prevent him from applying Decrease Speed debuff as it can mess up the Dreadhorn turn sequence! 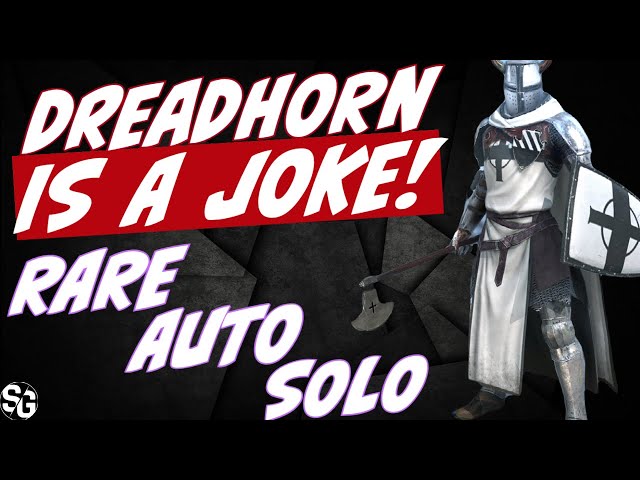 This strategy was shared by u/OpheliaA1 on Reddit on how Crimson Helm is able to solo Bommal the Dreadhorn in Doom Tower Hard Floor 90 by timing the Revive on Death and Block Damage skills to stay alive against Bomb debuff and Dreadbomb kamikaze attacks! StewGaming created a video explaining it in detail about the artifacts and masteries to be used on Crimson Helm. If you are finding for a solution to bypass this obstacle in Doom Tower, then this solution will be the one for you as it does not cost much resources. You will need Crimson Helm A2 and A3 to be fully booked and equip her in Regeneration Set and Immortal Set to recover quickly against the devastating Dreadhorn and Dreadbomb attacks. This method requires the player to manual the fight until end of battle. If you are looking for a team to auto farm forging materials from Bommal the Dreadhorn, this strategy will not suit your needs. 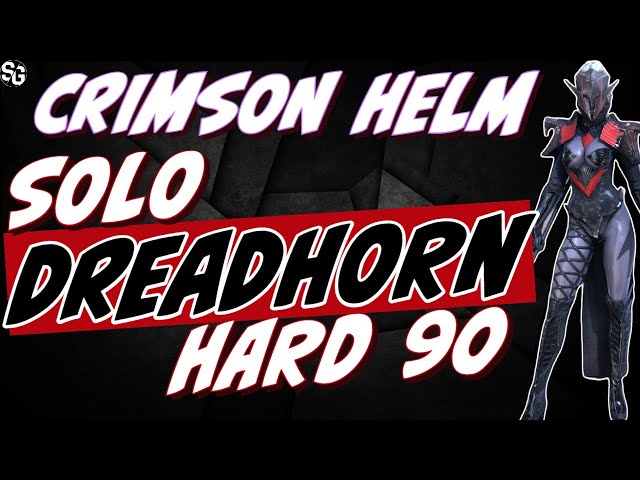 This strategy was showcased by boomer, which relies on 5 champions who are Siphi the Lost Bride, Duchess Lilitu, Drexthar Bloodtwin, Vogoth and Candraphon. All of the champions except Duchess Lilitu are in Deflection Set to reflect the Bomb debuff to the boss while Duchess Lilitu is build in high resistance (800 Resist stat + 80 Resist for Siphi’s Aura) to ensure she does not die. Siphi provides AoE passive healing to all allies and Resist Aura, Duchess Lilitu to revive all allies when they are killed by the Bomb debuff, Drexthar Bloodtwin to inflict HP Burn on the boss with his passive skill, Vogoth for AoE Healing whenever he receives damage and Candraphon to defeat the enemies quickly with his nuke damage. The advantage of this strategy is it takes way lesser time to complete the run. However, it requires a great amount of Deflection Set, which can be obtain from Arena Platinum Rewards or gathering sufficient materials from completing Tournaments to craft Deflection Sets. 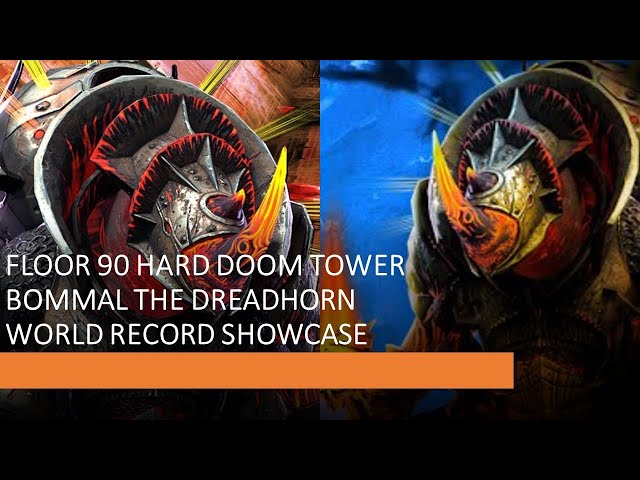 Utilizing Dreadbombs to heal your team!

This strategy was showcased by Soda Dragon Gaming, which relies on 3 champions who are Visix the Unbowed, Vrask and 3 Vogoth. This strategy works is Visix will triggers the Dreadhorn’s passive skill to summon his Dreadbomb each time she decreases his turn meter. When the Dreadbomb takes their turn to deal AoE explosion damage, Vogoth passive skill kicks in to heal all allies to their full health! This team was tested on Doom Tower Hard Floor 90 on full auto and it works very well! Check out Soda Dragon Gaming video here! 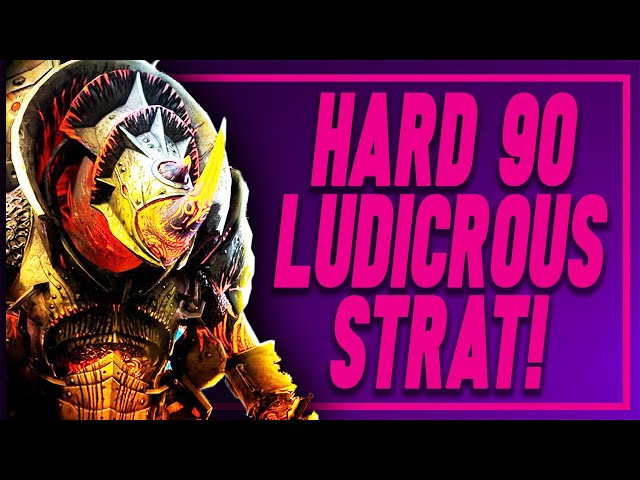 This strategy was showcased by MurderInc, which relies on 5 champions who are Doompriest, Sinesha, Vrask, Vogoth and Master Butcher. How this strategy works is it relies the champions to be built rather tanky with lots of Health and a decent amount of Defense. These champions are equipped in Regeneration Set and Immortal Set to provide additional healing to themselves to counter against the Bomb debuff damage. This team was tested on Doom Tower Hard floor 90 on full auto and it works with minimal issues. Check out MurderInc video here! 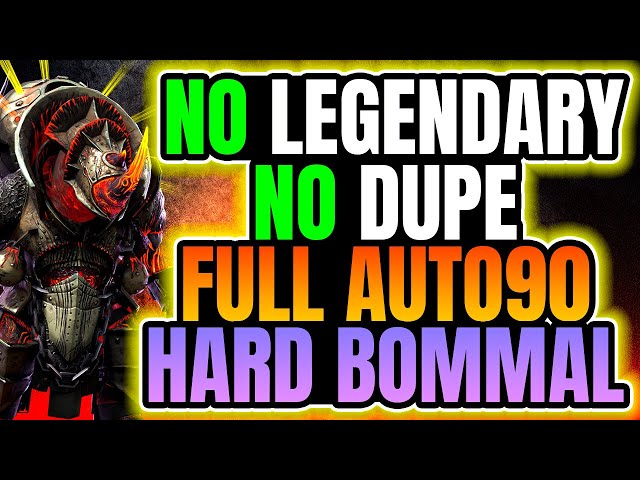 This strategy was showcased by Skratch, which relies on Burangiri to solo Dreadhorn while the you can use any champions to clear the first 2 waves of the mobs quickly. Burangiri equipped in Regeneration Set and Immortal Set to keep his Health above 50%, so whenever the Dreadbomb blows up, he will be able to survive the first Dreadbomb and then his passive skill will heal him 50% of his health to tank the second Dreadbomb! However, this strategy works up to Doom Tower Hard Floor 50 as Floor 90 is too difficult 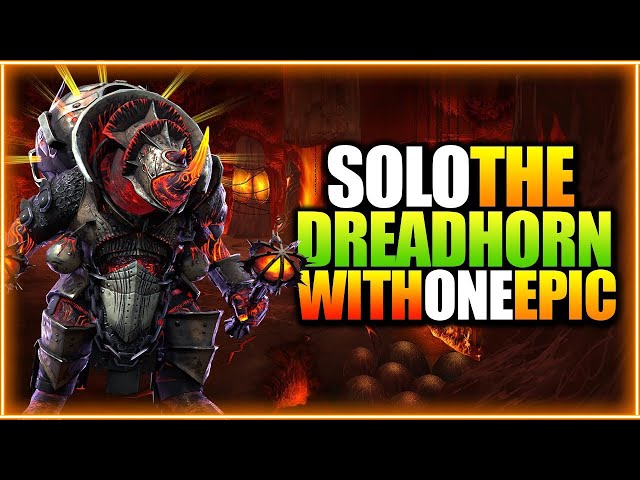 This strategy was showcased by StewGaming, which relies on 1 champion who is Samar Gemcursed to solo the boss, while the you can use any champions to clear the first 2 waves of the mobs quickly. Samar Gemcursed is equipped in Regeneration Set and Immortal Set to keep his Health above 50% and this 1 relies on RNG and timing where his Block Damage will be up to prevent the second Dreadbomb from dealing any damage to him! 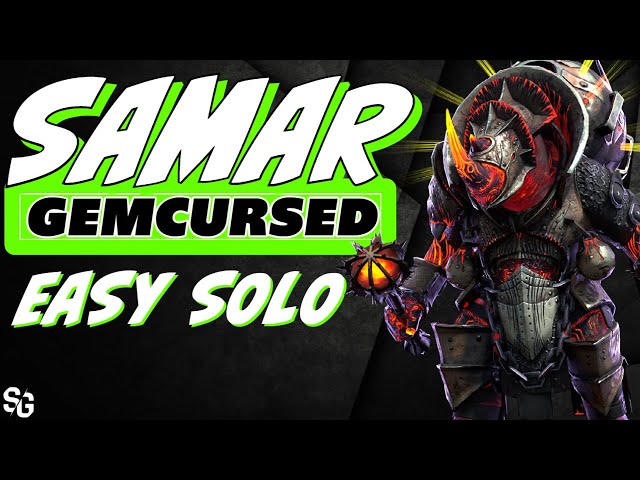 This strategy was showcased by MurderInc, which relies on Wurlim Frostking, Underpriest Brogni, Urogrim, Valkyrie and Vizier Ovelis. Wurlim provides Decrease Accuracy to prevent him from applying Bomb debuff on this high resistance team. Underpriest Brogni in the leader position to provide Resist Aura for more Resistance in case your champions lacks sufficient Resist stat. Valkyrie to provide a second layer of defense with her massive AoE Shield, which synergizes with Underpriest Brogni passive skill where it heals allies whenever damage is done to the shield. Urogrim to inflict Poison debuff on the boss to take him down quickly. Finally, Vizier Ovelis to increase debuff duration, especially for the Decrease Accuracy debuff to ensure the run will be safe. 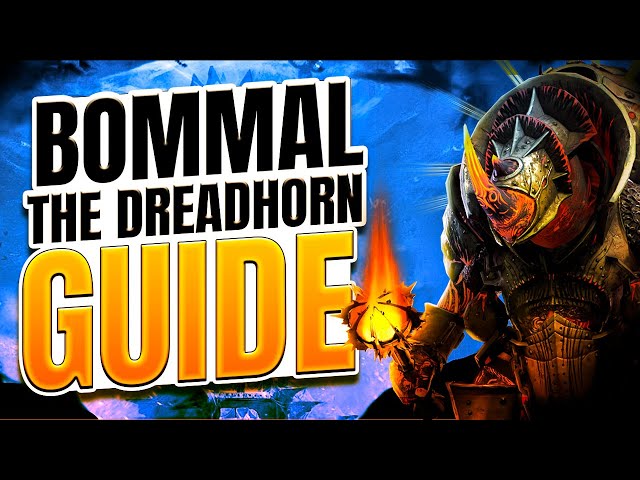 This video explains about the 2 new bosses Astranyx the Dark Fae and Bommal the Dreadhorn about their game mechanics briefly. In addition, it also talks about the forging materials that are dropped from the boss and artifact sets that can be crafted from them in the Forge! 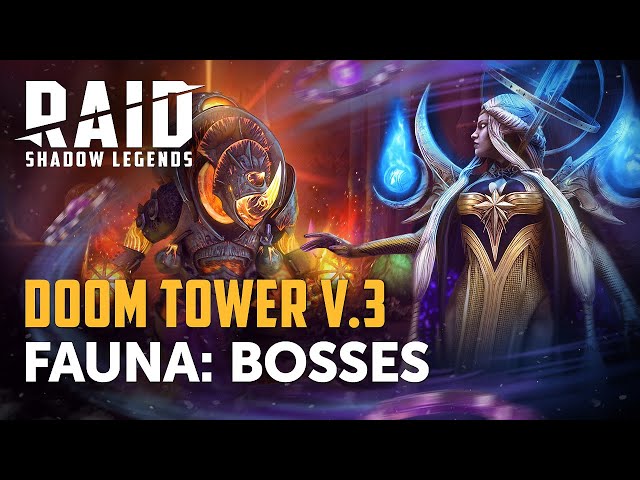