Archmage Hellmut is an Epic Support Magic champion from Banner Lords in Raid Shadow Legends. Archmage Hellmut was released in Patch 3.00 on 3rd December 2020 as part of Normal Doom Tower reward upon collecting all fragments from the Secret Rooms. His skill kit revolves around crowd controlling enemies with Stun and decreasing the enemy turn meter. He also supports his allies with Increase Turn Meter, Increase Speed and Increase Critical Damage buffs. He was previously named as Royal Archmage before being renamed as Archmage Hellmut.

Aura
Increase Ally SPD in the Arena by 17% Below is a reference to the artifacts equipped on Archmage Hellmut, which are Relentless Set and Speed Set to provide him sufficient speed and turns to quickly reduces his skill cooldowns to re-apply Stun debuff to crowd control enemies effectively. This setup is great for Arena, Doom Tower, and Faction Wars to crowd control mobs of enemies with his Stun debuff, which gives some breathing room for other champions to heal injured allies, revive fallen allies and nuke the enemies. The stats prioritized on Archmage Hellmut are Speed, Accuracy, and Critical Rate. This setup is suitable for Speed Nuke and Crowd Control Team rather than sustain as he lacks the HP and Defense stats to be able to tank heavy damage. However, if you can pair him with a tanker who has the abilities of Ally Protection, Shield, Provoke and Shield, this will help protect squishy champions like Archmage Hellmut! 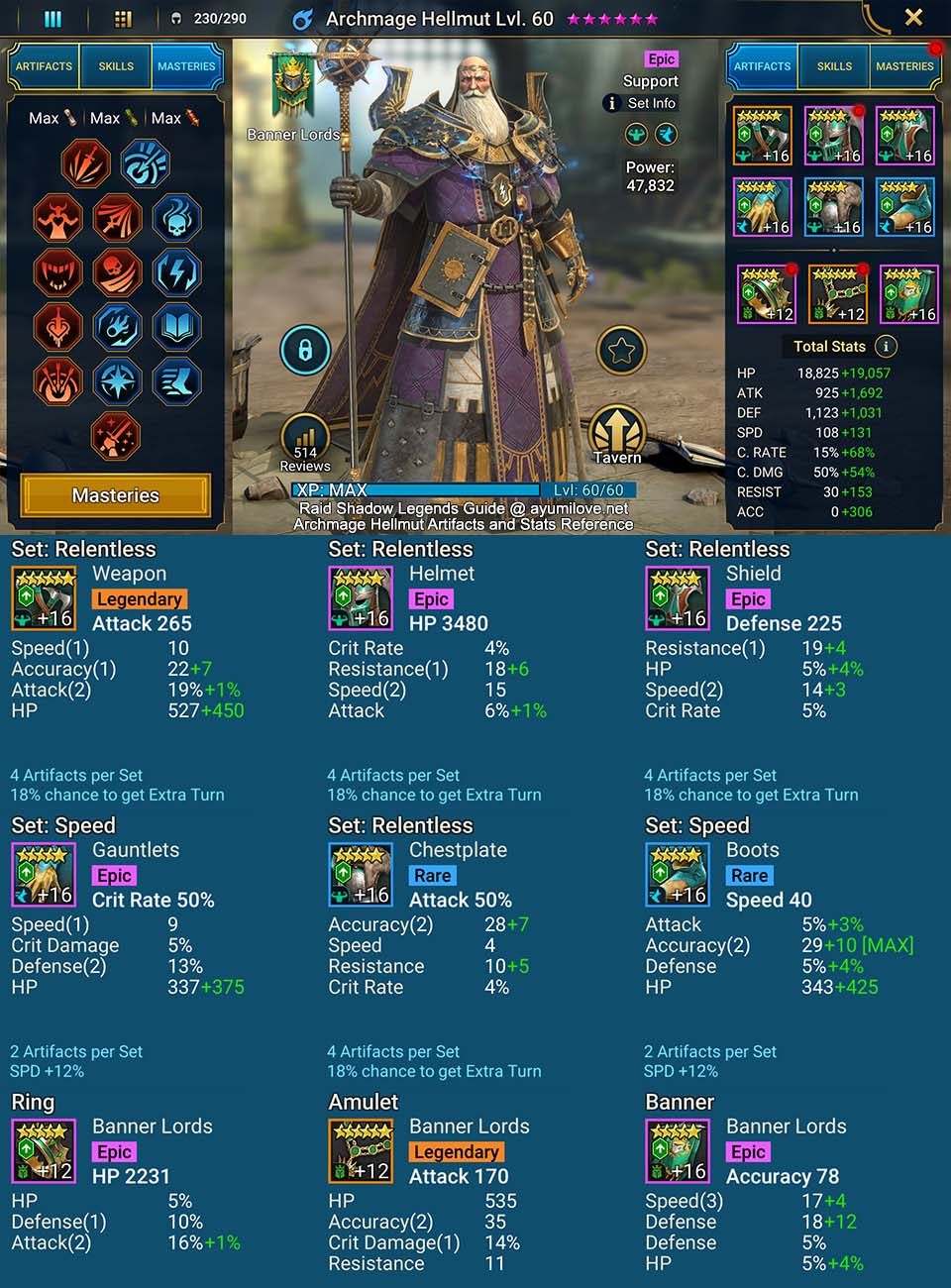 Not a single soul in Teleria could deny that magic offers a path to power. In days long gone, it was commonplace for shamans and sorcerers to command nations, and to this day, it is not unheard of for the rulers of Aravia to practice arcane arts. Even the monarchs not blessed with natural magic talent often find themselves in need of a wizard – thus many magicians flock to the courts of the rich and the powerful. For most commoners, amusing some of baron’s guests with tricks or scrying their future is the height of ambition. But becoming a Royal Archmage for the King of Kaerok, the Knight of Knights? That requires intelligence and the strength few possess. Born to a simple scribe, Hellmut was surrounded by books, scrolls, and the scent of ink from the very first days of his life. He learned to write and read earlier than most of his peers and often spent his days stuck in a book from dawn to dusk. Had it continued like that, Hellmut would have become an excellent scribe, perhaps even attain a cushy position as a magistrate for some Duke. But fate had other plans. In his seventh year, Hellmut created something of an uproar when he set the town library on fire after attempting to replicate a faded cantrip formula he found. That in itself was quite an achievement, and the boy was fortunate to have his talents noticed by one of the local Marquise’s officials. Soon enough, a messenger arrived with the Banner Lord’s decree – Hellmut was to pack whatever possessions he had and depart for the Mage Seminary of Kaerok. There, he would spend the rest of his formative years and learn his new craft. It was the last time he had seen his home. It took long twenty years before Hellmut emerged from the cloistered towers of the Seminary, a mage in his own right. He was ambitious, intelligent, and garnered the attention of many prominent wizards of his time. But it was the Royal Court that called to Hellmut, and thus he set out to the Castle of Kaerok where the King’s majordomo ensured his services were put to good use. In that role, Hellmut accompanied armies and headed expeditions into the most dangerous corners of Teleria. He defeated Zavir the Crimson Eye – a powerful Orc warlock whose tribe raided the eastern borders of Kaerok – in a duel of arcane prowess and claimed countless artifacts for the King. The realm’s most influential nobles sought his counsel, so it was no surprise Hellmut was named the Royal Archmage after his predecessor died in a freak accident involving a barrel of dragon dust and an experimental witchfire lantern. Having inherited Bibliotheque Spire, one of the greatest repositories of knowledge known to man, Hellmut plunged headlong into research and disappeared from the court for almost a year. Tractates on extremely complex chrono-magic and the art of manipulating various elements had given the newly-anointed Archmage insight into many mysteries which his peers could only dream of. Alas, even wizards of great intelligence are not immune to deceit. An elven sorceress by the name of Rian managed to attract Hellmut’s eyes. She was shrewd, charismatic, talented, and had a knack for carrying out the most difficult missions with discretion. Hellmut had taken the young woman under his wing and was repaid with treachery. Rian, as it turned out, was a dark mage who only sought to use him to gain access to the Bibliotheque Spire. She stole valuable artifacts and escaped through trickery when Hellmut almost had her cornered. Yet the Royal Archmage would not rest until his honor was satisfied. He personally led hunting parties that searched far and wide for his treacherous apprentice, but fortune was not on his side this time. Perhaps that is how Archmage Hellmut came into contact with the Arbiter. Had she offered him a chance to see justice done in exchange for his eternal services? Perhaps you will be able to ask yourself, should you gain the venerable wizard’s loyalty. 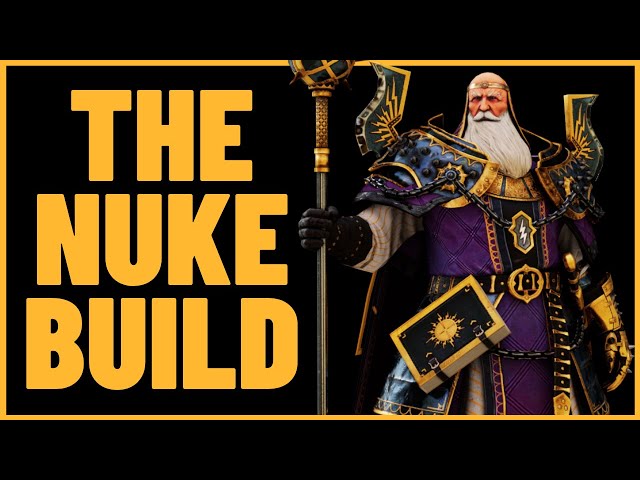 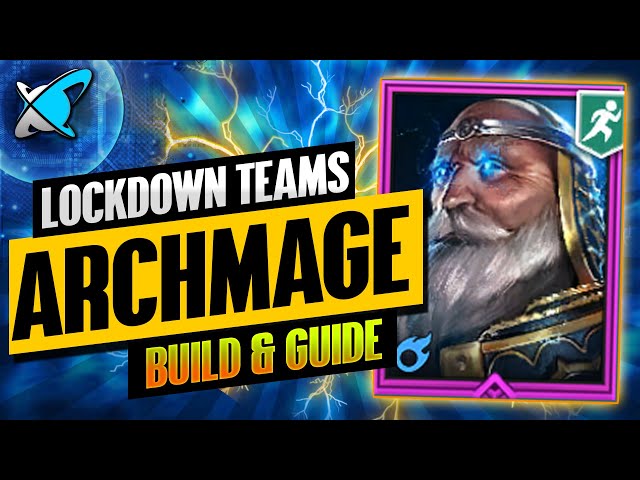 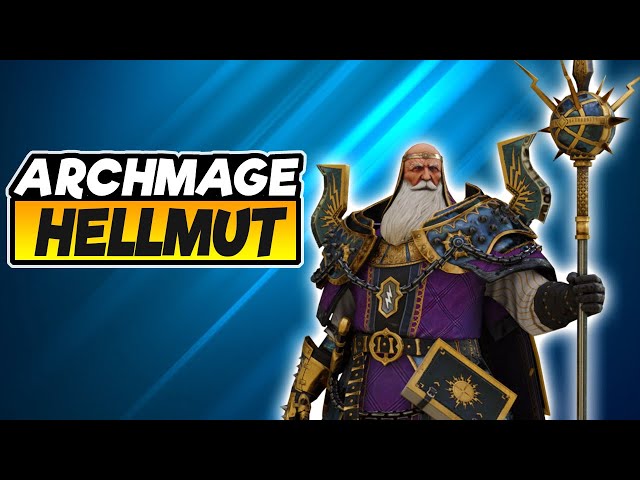 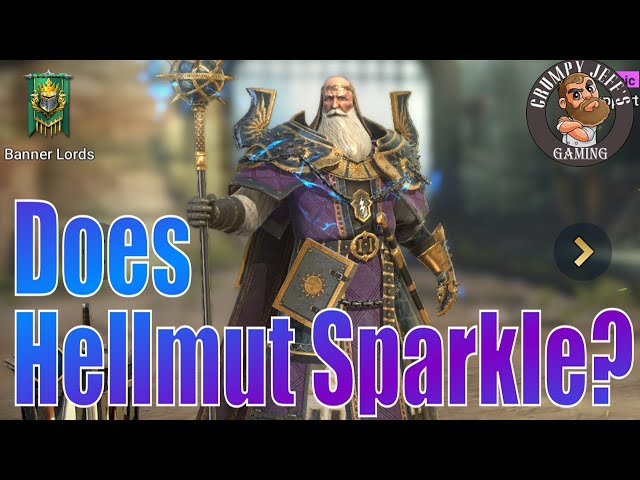 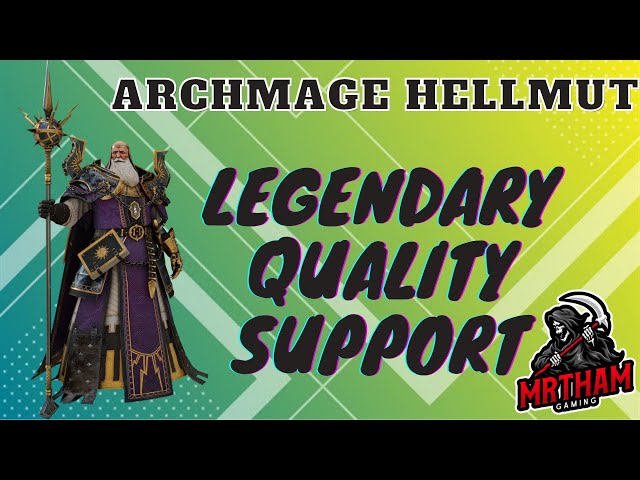