Azure Redeemer (Cooldown: 5 turns)
Removes all debuffs from all allies, then heals all allies by 30% of this champion’s MAX HP
Level 2: Cooldown -1
Level 3: Cooldown -1

Eternal Flame [Passive]
Places a 15% [Continuous Heal] buff on the ally with the lowest HP for 1 turn at the start of each turn.

Aura
Increases Ally Resist in all Battles by 50.

This is an all-rounder mastery for Wythir the Crowned that caters for early-mid game progression PvE content in the game. If you need to use her in a speed-tuned composition such as Clan Boss team when you are at a , swap Rapid Response with Life Drinker for the 3rd Tier Mastery, and swap Lore of Steel with Wrath of the Slain mastery for the 4th Tier Mastery. This is a high-resist mastery for Wythir the Crowned that specializes her role as a cleanser and healer for late game players to carry your team in difficult content such as Hard Doom Tower. High resistance prevents her from being crowd control by Stun, Freeze, Fear, Sleep and Provoke, so she can cleanse them away from your allies who are susceptible to it. Defense Mastery Tree is opted over Offense Mastery Tree to increase her survivability against debuffs and reduce damage intake from enemies. Pre-requisite: Wythir the Crowned to be equipped with Stun Set as the masteries optimized to improve the success rate of the Stun effects from artifact set! If you plan to use her as your Spider tank bait (weak/negative affinity), then I would recommend opting Defiant and Improved Parry instead of Tough Skin and Blastproof mastery in the Defense Mastery Tree! I would recommend stacking higher amount of Resistance on her to avoid receiving Poison debuff from spiderling as it will consuming her health quickly. 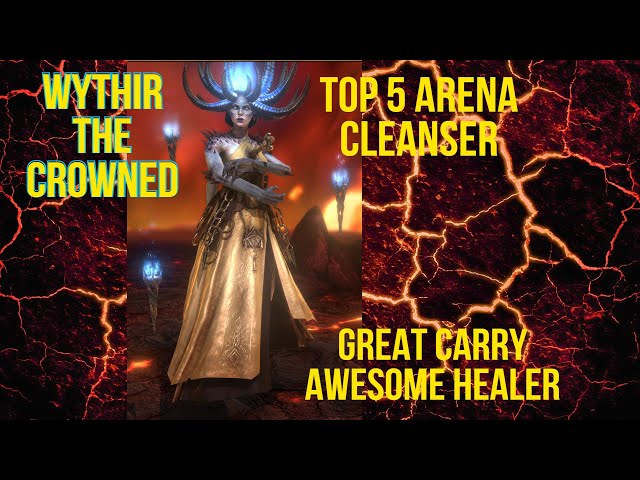