Duchess Lilitu is a Legendary Support Spirit champion from Demonspawn faction in Raid Shadow Legends. Duchess Lilitu is one of the most sought-after champions in the game who can carry your entire team, speed up your game progression and the best part is she will still be viable till the end game content! If you managed to summon her, congratulations and end-game content will be a cakewalk after dressing her up with upgraded artifacts farmed from the dungeons. Check this full review of Duchess Lilitu for more info!

Ethereal Ways [Passive]
Decreases the damage taken by all allies from AoE attacks by 25% (15% from Bosses). Alternatively, you can equip Duchess Lilitu in Regeneration Set or Immortal Set to enable her to be self-sustain with healing from artifact sets!

Here is Duchess Lilitu’s artifacts and masteries by Ayumilove optimized for Arena, Faction Wars, and Doom Tower (Normal and Hard mode). Duchess Lilitu is equipped with Immortal Set and Speed Set to provide her with sufficient Speed and passive healing. The important stats to prioritize to make her as tanky as possible is to have a high amount of HP, DEF, SPD, and RESIST. The amount of Resistance varies depending on the tier you are working on (e.g. Doom Tower Normal/Hard, Arena Bronze/Silver/Gold). The build below is useful for Arena Gold IV and Doom Tower Hard floors and bosses (e.g. Eternal Dragon, Celestial Griffin, Frost Spider, Nether Spider, and Magma Dragon). Duchess Lilitu is useful in all areas of the game because she is able to carry g your entire team through difficult challenges with ease! She has an awesome passive skill that reduces incoming damage from enemies AoE attack, hide squishy champions on your team with Veil as well as AoE Revive to raise fallen allies. 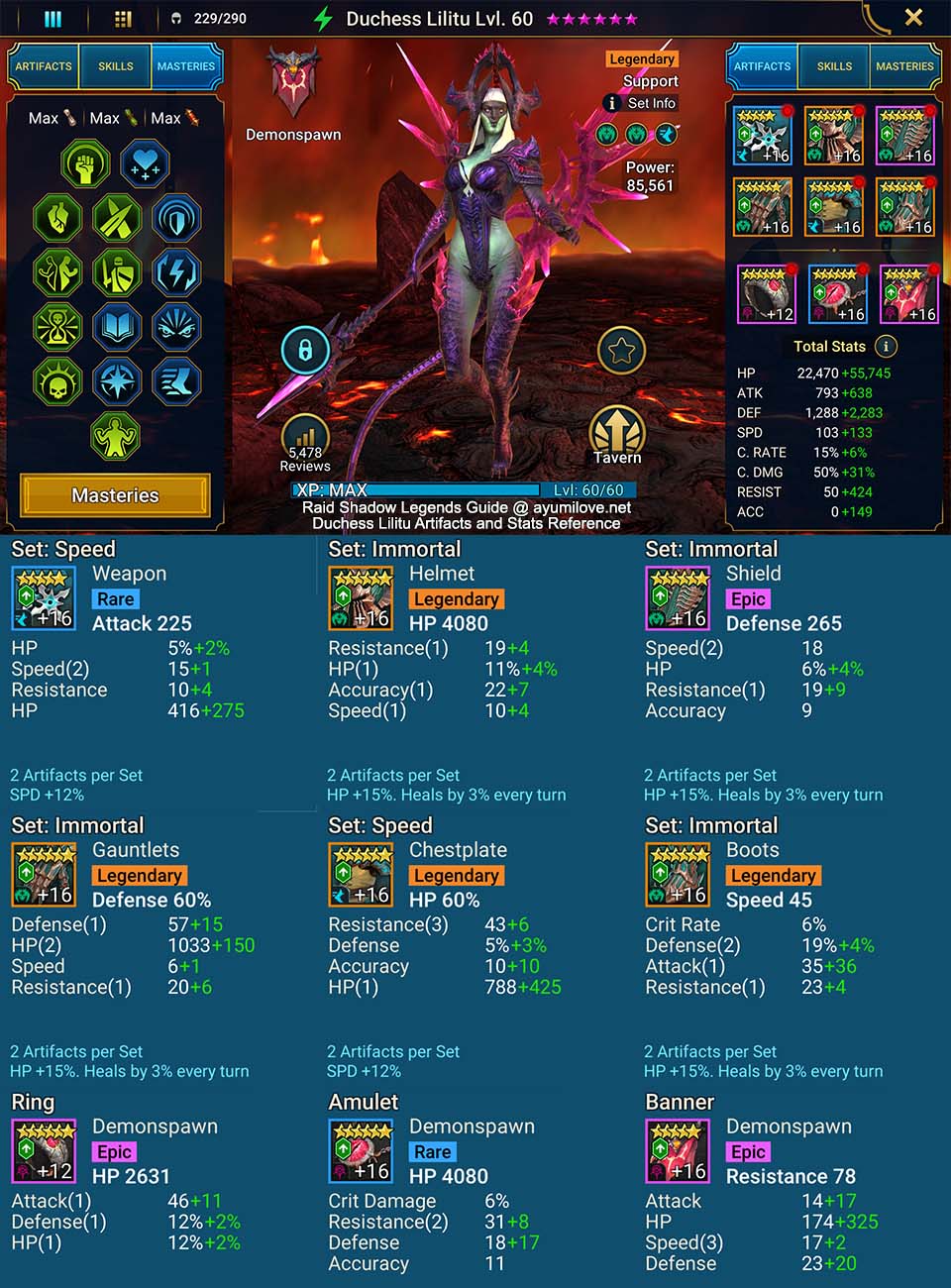 Duchess Lilitu is one of the most powerful demons in Siroth’s legions and a lieutenant of Mortu-Macaab. Her sorcerous powers are only matched by her cunning mind and experience. Indeed, Lilitu had the benefit of existing for thousands of years, learning all there is to learn about Dark Magic and the hellish intrigues of the demonic courts. In fact, she has lived long enough to personally take part in no less than three invasions of Teleria. She battled the Arbiter and survived the experience – barely, not that she would ever admit to the fact – which is an achievement in its own right. One of Lilitu’s greatest strength is her wise assessment of her own talents and the lack of arrogance that is so very common among her kin. She knows that she is no warrior of legend and would be of little use in the swirling melee. Instead, she focuses her powers on empowering and protecting those who fight for her. In battle, Lilitu chants incantations and spell in the dark tongue now forgotten by all but the servants of Siroth, calling upon the very fabric of the Void to shiel her allies. She does that not out of the kindness of her heart, of course, but with a cold and calculated purpose of keeping her minions alive for long enough to carry out her will. For that very reason, she will expend a great deal of magical energy to seize the souls of the fallen and guide them back into their mortal vessels, healing their wounds and making them fight anew. Now, as the dark will of Siroth envelops the whole of Teleria once more, Lilitu strikes out from her infernal palace, her armies at her back. It is high time the mortals pay for past insults and bend the knee at long last. 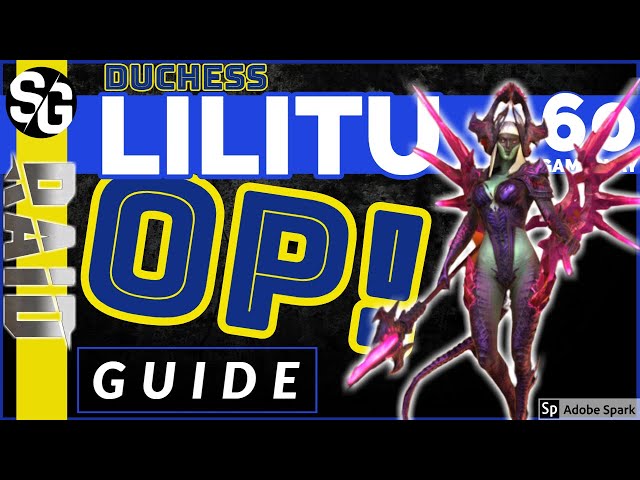 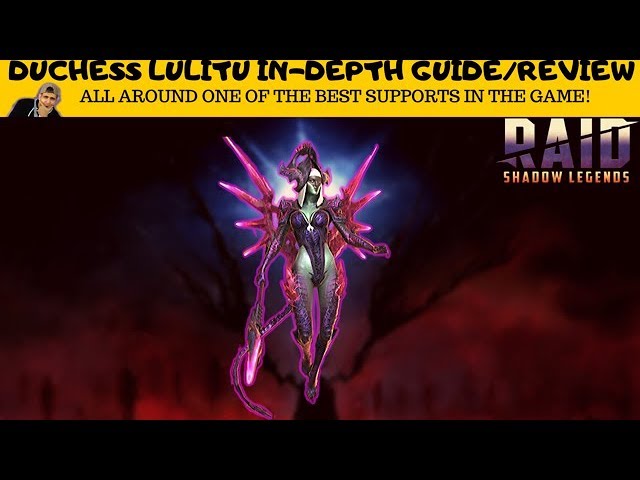 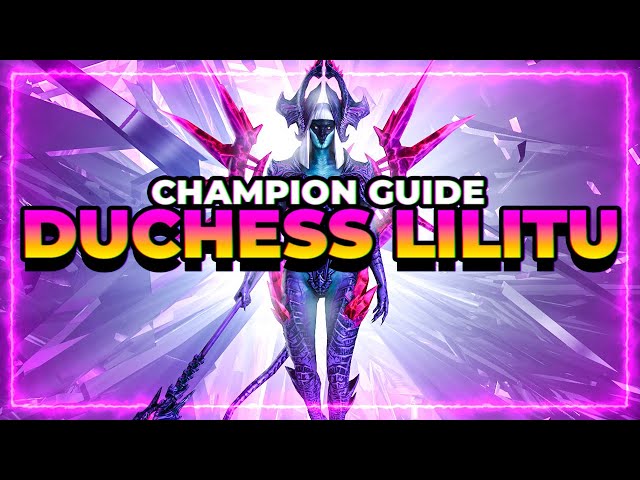 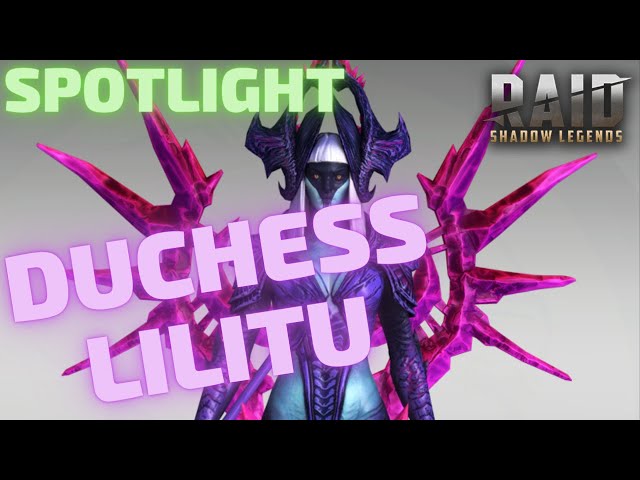