Opardin Clanfather is a Legendary HP Magic champion from Barbarians in Raid Shadow Legends. Opardin Clanfather was released in Patch 5.10 as part of the Fragment Fusion Event on 17th December 2021. His kit revolves around healing, cleansing and boosting allies turn meter while being able to inflict heavy damage to enemies similarly to Sir Nicholas as his damage scales based on his Max Health.

Paired Hammers is Opardin’s default attack that deals damage to an enemy twice with each hit having the ability to decrease their Turn Meter and increasing his own Turn Meter. Although this skill does not bring much value in terms of crowd controlling an enemy effectively like Armiger, the damage dealt by this skill packs a punch as it hits twice.

Rally the Tribe (A2 Skill) is his AoE attack that deals a massive amount of damage to enemies while simultaneously healing all allies based on his Max Health. The healing potency increases when his team members have Continuous Heal buff on themselves. It’s a good skill that provides both offense and support within the same turn, which makes him a battle cleric similarly to Vrask.

Clan Mentor (A3 Skill) is the skill that synergizes with his previous skill by providing Continuous Heal buffs to all allies after he removes any Block Buff and Heal Reduction debuff if its present and an additional random debuff upon fully maxing this skill. The downside of this skill is it does not provide instant healing and cleansing when the battle gets intense. This setup requires you to build your team tanky to survive the initial enemy nukes or have another support healer in the team as a backup. Alternatively, using a crowd controller helps provide breathing room for your team to recuperate from Continuous Heal.

Paternal is Opardin’s signature passive skill that boost an ally’s turn meter whenever they receive healing from Continuous Heal! Pairing him with champions who can place multiple stacks of Continous Heal such as Bad-el-Kazar, Tuhanarak or Wythir the Crowned allows you to take advantage of this ability to lap the enemies multiple times in a lengthy battle.

Overall, Opardin Clanfather is a decent Legendary support hero. He can help early-mid game players struggling with complex content if they do not have any existing healer or carry champion in their team, such as Scyl of the Drakes. His skills are just average as a Legendary champion. If Opardin was an Epic champion, it’s much more valuable getting him as it costs way fewer resources to ascend and max his skills. I ponder why the game developers decided to put Opardin Clanfather in Barbarians rather than Skinwalker as his character design with horns fits him there much better.

For his build, I would recommend building him in high amounts of Health, Critical Rate, Critical Damage, and Speed stats to unleash his full potential as a damage dealer and healer based on his skill design. Otherwise, having Health, Defense, Speed, and Accuracy/Resist stats is a better option for early-mid game players.

Paternal [Passive]
Each time a [Continuous Heal] buff heals an ally, it fills that ally’s Turn Meter by 5%. If there are multiple Champions in the team with this skill, only one will activate.

Here is Opardin Clanfather’s masteries optimised to be suitable as an all-rounder build for all content in the game. Offense Tree and Support Tree is selected for Opardin Clanfather to make him useful for boss raiding and enhance his healing abilities. Here are Opardin Clanfather artifacts and masteries by Skratch optimized as a Support champion to help players during the early-mid game progression. He is equipped in Speed, Accuracy, and Resilience Set. The stats to focus on him are Health, Defense, Speed, and Accuracy to enable him to sustain against enemies attacks while supporting his allies with heal, cleansing, and decreasing enemy turn meter. The mastery selected for Opardin are Offense and Support, so he could deal some damage to bosses with Warmaster and improve his healing efficiency with Lay on Hands, Healing Savior, and Lasting Gifts. For the equipment’s primary stats, get Health% for glove and chest plate while flat Health for Ring, Amulet, and Banner. 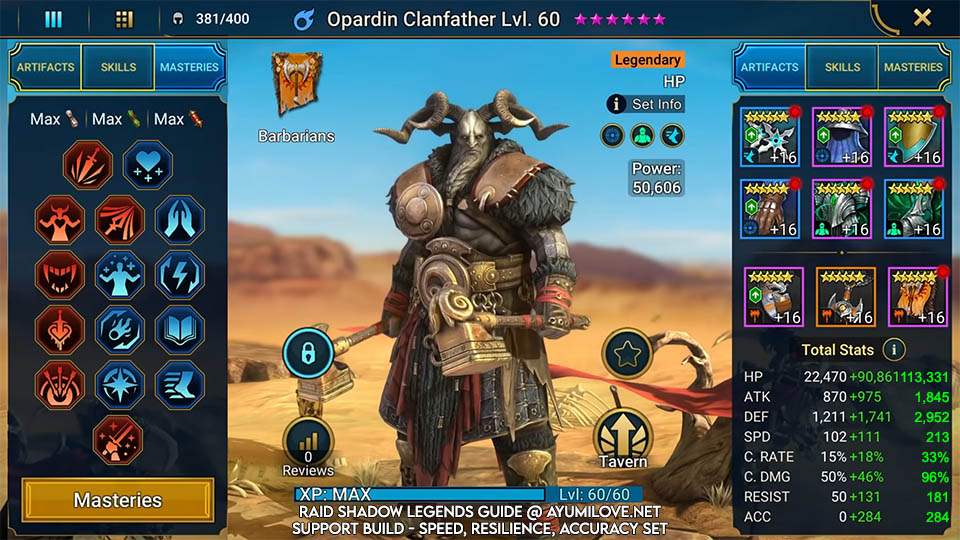 Here are Opardin Clanfather artifacts and masteries by Skratch as an Offense champion in an end-game nuker build to deal a massive amount of damage. He is equipped in Savage Set and Speed Set to start his turn before the enemies and ignore the enemy’s defense when dealing damage. The stats to focus on him are Health, Critical Rate, Critical Damage, and Speed to raise his damage potential. Accuracy and Resistance stat is not the priority as a nuker here. The selected masteries for him are Offense and Support to unlock Helmsmasher for an additional ignore enemy defense with other increased damage mastery and the same Support masteries to improve his healing efficiency with Lay on Hands, Healing Savior, and Lasting Gifts. For the equipment’s primary stats, get a Critical Rate glove to achieve 100% Critical Rate. If you can obtain this stat quickly, swap it with a Critical Damage glove and amulet to raise his Critical damage. 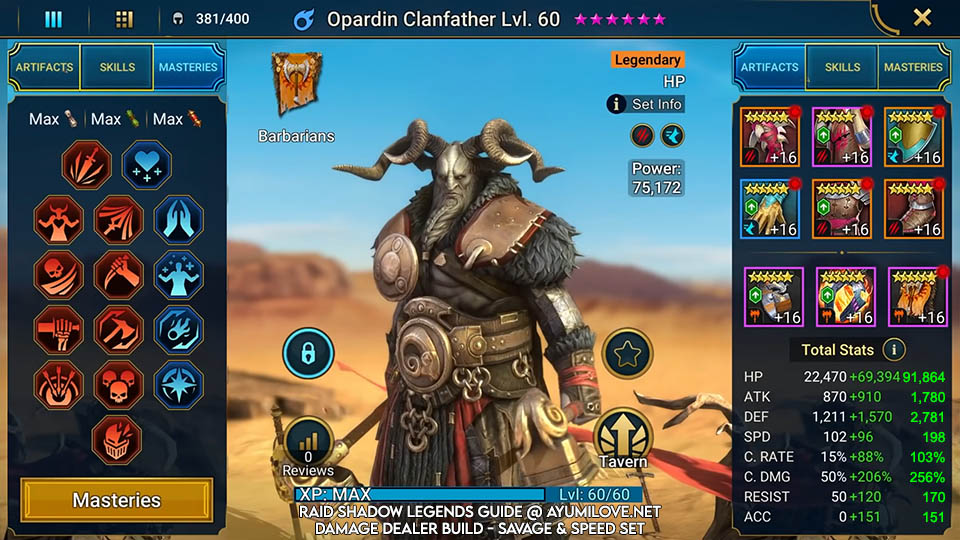 From the day of his birth, Opardin had been marked by spirits. His ashen skin and the first sprouts of twisting horns caused a great deal of commotion amid the clan members, but the wise woman who served the chieftain saw something beyond the infant’s strange appearance. She believed that Hulderkall – the mythical forest spirits of the Norr homeland – bestowed their blessings on the child. For it was their blood that flowed in Opardin’s veins; their strength and cunning would be his birthright. Though some remained wary, the clan members bowed before the witch’s knowledge and let the boy live.

Opardin grew up and matured under the watchful gaze of the chieftain and his warriors. He had proven himself both strong and brave in that time, yet the prophesied wisdom was not as swift to manifest – the young warrior was a braggart beyond equal who cared only about fame. Wisdom came later and at a terrible price.

Once upon bloody dawn, a raiding party of Orcs fell upon the village. Opardin was among the first to join the fray, but his thoughts were on proving his might rather than protecting his kin. Like a raging bull, he smashed into the attackers. None of them could match his prowess, but Opardin was still one man against a score of brutal foes. Alone, he was delayed and could not aid his friends and kin while they were overwhelmed all around him.

In the end, the Norr prevailed at a high cost. Many were slain, and Opardin too returned to find his mother amid the bodies of the dead. Heartbroken by realizing that his selfishness and lust for glory were to blame, he left the clan and went into a self-imposed exile. For many years his fate remained unknown. Many even believed he had taken his life, unable to bear the shame. But they were wrong – Opardin returned almost a decade later, matured by the journey and the lessons he had learned in distant lands.

It took many moons to win the trust of his kindred once more, but Opardin never backed down from a challenge. He was confident in his abilities, yet humble and respectful to his elders, and his hard-won wisdom shined in times of great peril. First, Opardin regained his clan’s trust. Then, he rose through the ranks to become the chieftain’s right hand. When the old warrior finally drew his last breath and departed the mortal world, few were surprised to see Opardin inherit the mantle.

His pride tempered by reason, Opardin knew that he was no noble of the civilized kingdoms, where one’s birth alone entitled them to wealth and respect. He knew the price of failure and hubris and ever strove to uphold the virtues of the Norr. Soon, Opardin became known as the Clanfather, to whom all could turn for guidance. And never did the clan know a worthier ruler.
Some even maintain Opardin did not waste away as mortals do but instead ascended to join the Ancestors’ sacred host, to do eternal battle against evil that threatens the world. Whether there is any truth to those stories, few can tell.
#raidlore 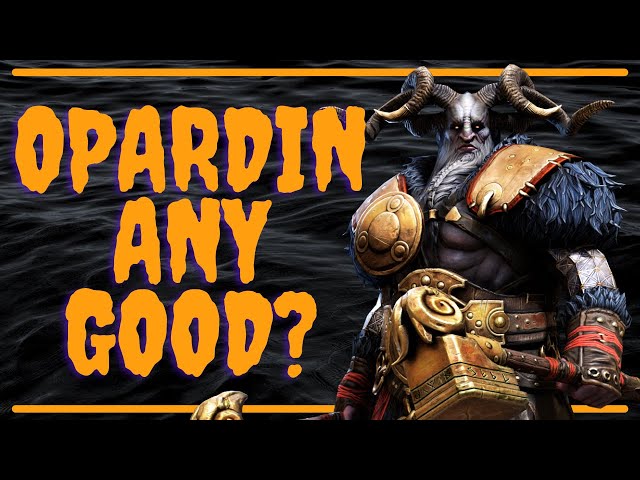 Skratch: Worth It? Heals for Days!! Opardin Clanfather Progression Champion 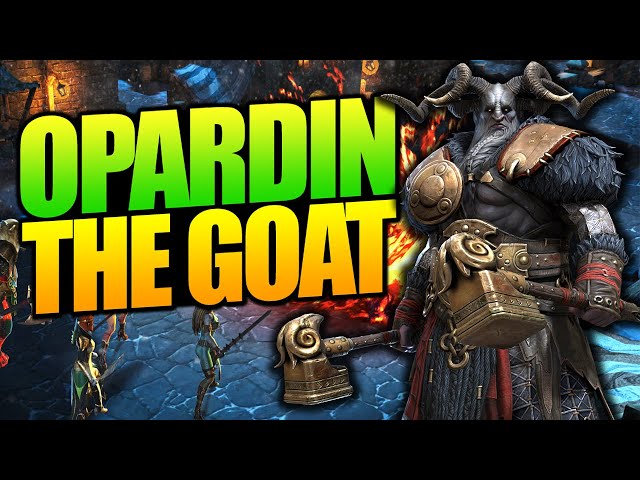 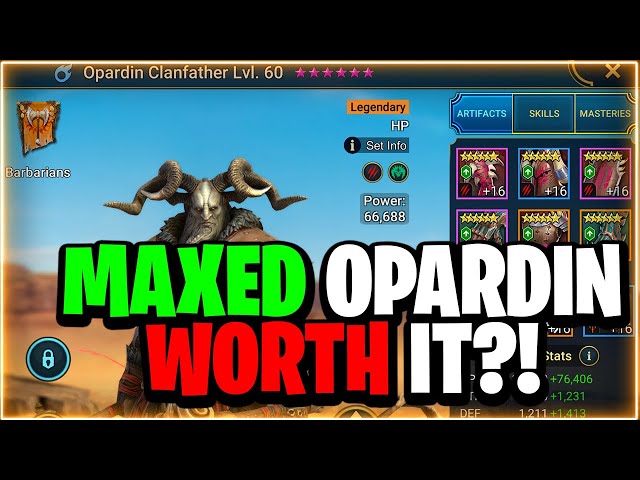