Ba Satha is a Legendary HP Magic affinity champion from Lizardmen faction in Raid Shadow Legends. Ba Satha can only be summoned from fragments earned from Doom Tower Secret Rooms in Hard difficulty.

Ba Satha’s Soulkeeper is a unique passive skill that disrupts the enemy’s team when they reviving their fallen ally. This has potential in affecting the current Arena meta where most of the teams revolves around stall team with relies heavily on Revive. In addition, Ba Satha’s Staggering Heft is a crowd controlling skill that stuns and decrease their turn meter, which is useful to prevent enemies from attacking your champions. He also has a strong HP Aura to buff up squishy low HP champions and God Beast’s Boon skill to provide AoE Strengthen with Continuous Heal to increase your champions’ survivability against powerful attacks. Last but not least, his default attack Death Roll skill has a special ability to apply Decrease Attack debuff, which is useful against bosses and Attack Type champions.

With these amazing skill set, Ba Satha is undoubtedly one of the most desired champions to get from Doom Tower!

Aura
Increases Ally HP in all Battles by 31% Clad in the armor of enchanted bronze, rippling with unfettered arcane power, the beast known as Ba Satha is the stuff of nightmares for those unfortunate enough to face it in battle. His howls echo with the screams of a thousand souls and chill the blood of even the bravest warriors, and his swinging tail can crumple steel as if it were rotten wood. It would be hard to imagine that such a savage monster was once among the first defenders of Teleria against the darkness of Siroth, but that is the truth.

Eons ago, when humans and elves were but fledgling upstarts and wars between the immortal servants of Lumaya and Siroth shook the realm, both deities sought to strengthen their armies with beasts and heroes of the ancient races. Ba Satha was one among the Lizardmen of old, a descendant of the dragons that sired the race. Despite a bestial appearance, he possessed intelligence and wisdom far beyond that of his kin – it was a gift Ba Satha used to guide his tribe in times of great turmoil that threatened Teleria itself. Under his leadership, an alliance of Lizardmen tribes faced the Demonspawn legions that rampaged in their land and triumphed. Though such an insult to the Dark Lord could not go unpunished – those tribes knew the demons and their thralls would seek revenge.

It was then Ba Satha earned the Arbiter’s attention. Lumaya’s herald reasoned that the Lizardmen had already made an enemy out of Siroth and would not refuse her help; there was a price, however, and Ba Satha had to bind his soul to the Arbiter’s will. It was a harsh bargain but a fair one, and the wise beast agreed to it in the end so that his kindred could be saved from the clutches of Siroth. Delighted, the Arbiter fulfilled her end of the pact and gave unto Ba Satha the gift of immortality and the power to control souls departing from their mortal shells. That way, she hoped, the Lizardmen would gain an advantage over the Dark Lord’s necromancers.

For many centuries after, Ba Satha waged war against the many terrifying abominations Siroth had created. It was his might that put an end to the dread Spider Queen Urgeth in the Battle of the Black Dawn, and he again who vanquished the Undead Magus Herih-An, whose hordes of living corpses lay waste across the western continent of Teleria. Indeed, in that mythical age before written history, Ba Satha was among the first and most powerful warriors of Light. To this day, legends of the God Beast survive in the folklore of Barbarian tribes and dusty old tomes in the Royal Library of Aravia.

Alas, the Lizardmen had since descended into savagery, and the Arbiter’s power waned. Ba Satha, still immortal, lost much of his previous self to the ruthless march of time and, like so many of his kin, became more alike to a vicious animal than a sentient being. Still, Ba Satha’s strength remains, and his hatred for the minions of Darkness burns as bright as it did before – perhaps this ancient creature can yet be brought into Lumaya’s service again. 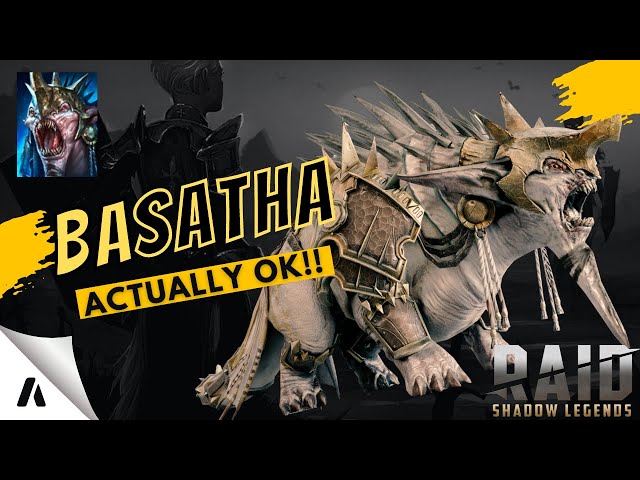