Kael is a Rare Attack Magic Champion from Dark Elves faction in Raid Shadow Legends. Kael is one of the 4 starter champions that you can select before you begin your game! He is well-known for his Poison skills as it’s immensely valuable for boss raiding, especially at Clan Boss, Dragon and Ice Golem. Dark Kael is his successor who can only be unlocked by collecting fragments of him by clearing Normal Doom Tower Secret Rooms!

Dark Bolt (A1 Skill) is Kael’s default attack that has the ability to apply Poison debuff on a single target enemy. It’s useful in taking out a champion who has vast amount of Health and Defense as Poison damage ignore all defense and deals damage based on their MAX HP. Kael requires Accuracy stats to inflict Poison debuff, so ensure he has sufficient amount of it. Otherwise, it will be resisted by the enemy! (Required Accuracy = Dungeon Level x 11).

Acid Rain (A2 Skill) is Kael’s Aoe Attack that hits all enemies in the battlefield. This skill provides an additional 15% Critical Rate, which means having at least 85% Critical Rate on Kael allows him to deal critical damage to wipe out enemies instantly. All starter champions (Athel, Elhain, Galek and Kael) have this unique passive Critical Rate boost on their AoE attack to give them an edge among all Rare champions! The exceptional part of this skill is Kael will gain 25% Turn Meter boost per enemy killed. This allows him to quickly take his turn again if he manages to kill multiple enemies at simultaneously!

Disintegrate (A3 Skill) is Kael’s signature Poison skill that inflicts a more deadlier Poison debuff. This skill deals lesser damage compared to all of his other skills if there are multiple enemies around, but deals a high amount of damage to a single target in total. If you are mainly using Kael as your primary Poisoner for boss raiding, kindly visit the Clan Boss guide to learn more about the required stats to optimize his build!

Last but not least, he has a Health Aura that can be used in all areas, which is helpful in boosting your champions survivability early game. Overall, Kael is one of the best Rare champions that is worth taking to Level 60. His role can be customized based on your game progression, either as a debuffer (early-mid game) or nuker (late game).

Aura
Increases Ally HP in all battles by 15%. Here is Kael artifacts and masteries by Ayumilove, optimized as an all-rounder champion to tackle Campaign, Clan Boss, Dungeons, Faction Wars and Normal Doom Tower content! Kael is equipped in Lifesteal Set to heal himself during battle, especially when speed farming campaign along with 3 fodders. This artifact set is recommended for early-mid game players for survivability, as you will be lacking in Health and Defense stats to tank the damage. The stats to prioritize on Kael for early-mid game are Health, Defense, Speed and Accuracy. Kael’s damage output will be mainly from Poison debuff. Hence, it’s advisable to make him beefy to be able to take a few hits from enemy, while inflicting Poison debuff on them to deal damage based on their MAX HP! Once you reached late game, you can build up his Attack, Critical Rate and Critical Damage for more damage output from his skills! 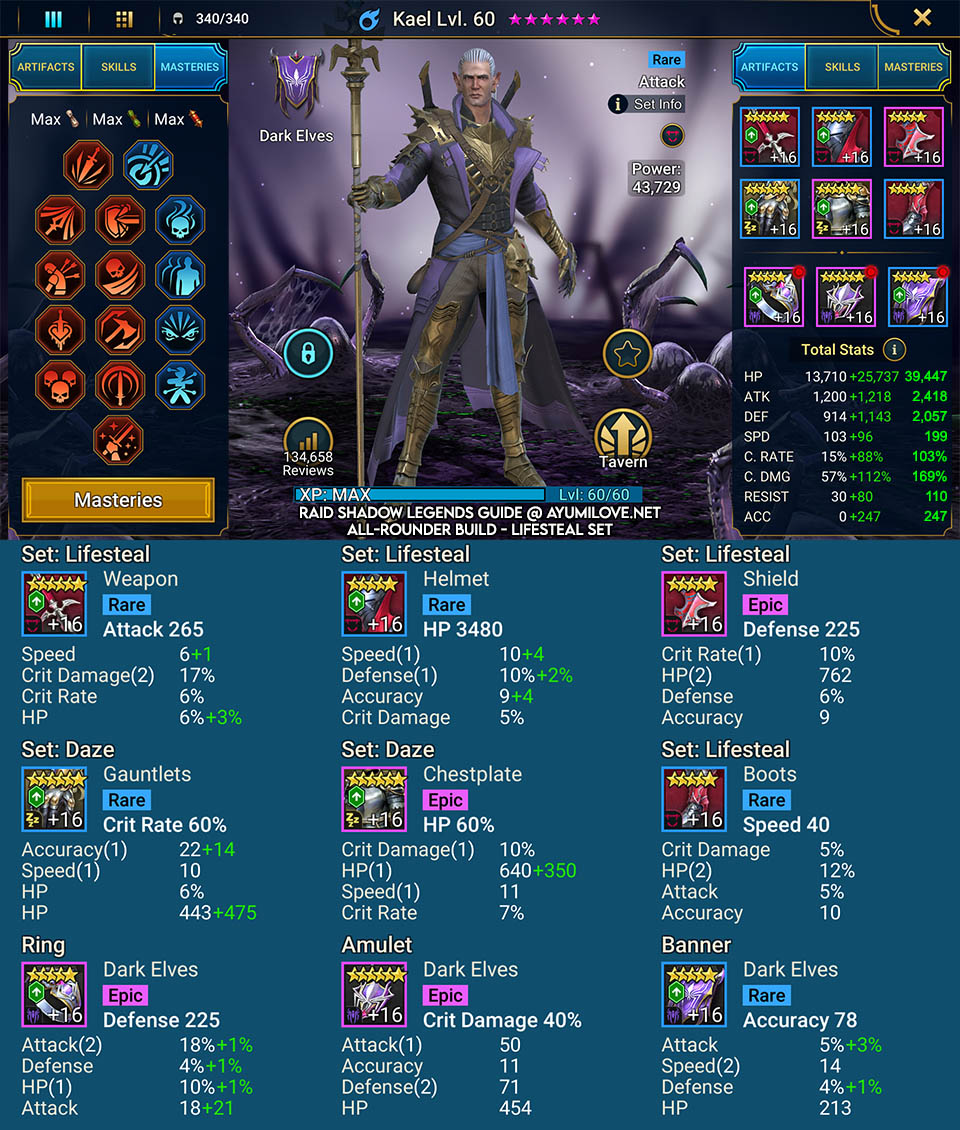 Here is Kael artifacts and masteries by Skratch, optimized as a damage nuker for Arena. Kael is equipped in Cruel Set and Speed Set. Cruel Set provides additional Attack stats and ignore a portion of enemy defense, while Speed Set provides additional speed stats. The stats to prioritize on Kael to maximize his damage output are Attack, Critical Rate, Critical Damage and Speed. Accuracy is not required as you will be solely relying on raw damage to knockout the enemy instantly rather than a long battle with Poison debuff. 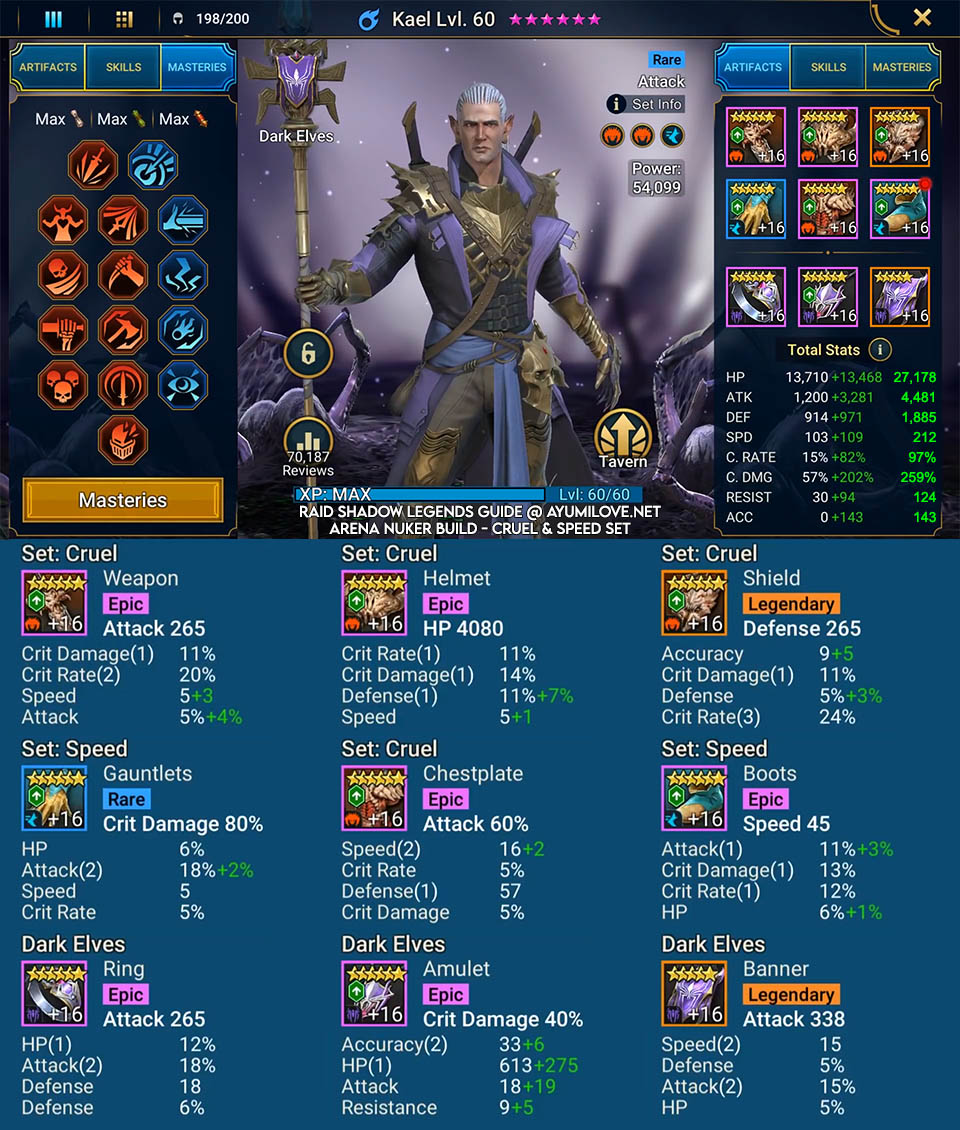 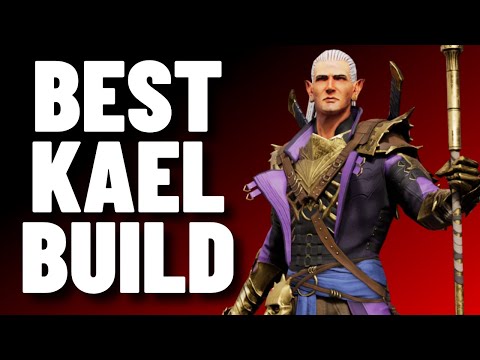