This mastery setup specializes for Spider’s Den dungeon where Infernal Baroness will be the tank/bait champion to auto provoke the Spiderlings in a weak affinity stage (e.g. Spider’s Den Stage 20 – Spirit Affinity). Infernal Baroness is required to be equipped with Retaliation Set or Lifesteal Set to heal from each of her AoE attacks. If you have a champion who could apply AoE Leech debuff to the spiderling’s (e.g. Ma’Shalled), then Retaliation Set would be much more beneficial as she can counterattack each time the Spiderling attacks her from either the trigger from Retaliation Set or Retribution mastery. The Spiderling will have a higher chance of activating a Critical Hit against champions who are weaker than them. Hence, its appropriate to have Improved Parry and Delay Death mastery to reduce the incoming damage. Life Drinker and Rejuvenation will increase the amount of healing that Infernal Baroness gets when she attacks and heals. Warmaster mastery is crucial as it will deal the damage based on Enemy MAX HP, which will convert into a large chunk of healing for Infernal Baroness to enable her to survive longer in battle! Do take note that you need to have your tank bait with high resist stat to resist the Spiderling’s poison debuff. For every Dungeon Level, multiply the Resist by 15 for a successful debuff resist! (Example: Stage 20 * 15 = 300 Resist). In addition, Bloodthirst and Blood Shield mastery does not proc against killing Spiderling, so these masteries would not benefit Infernal Baroness to increase her survivability in Spider’s Den. Raid Shadow Legends – Infernal Baroness is an Epic Defense Force champion from the Demonspawn faction where she is obtainable from Ancient Shards and Sacred Shards.

For all their vile nature and often bestial ferocity in battle, Demonspawn legions are far from being an uncontrollable horde. Indeed, their discipline and organization are among the prime reasons why the servants of Siroth are so dangerous. Their twisted commanders bear many of the same titles of nobility that the Lords of Teleria are used to, and often direct their lesser kin with guile and ruthless intent. The Infernal Baroness prefers to let her minions – and, of course, a majestic being like her can only have minions, not allies – to do most of the fighting, while she directs them. One should not mistake that for inability to fight, however. This demoness is more than capable of dispatching foes in person, should the need arise, and she does strike out frequently, allowing those at her side to be strengthened by the blood she spills while her foes wither and turn frail. She is even capable of bending the shadows to her will and wrapping them around her chosen Champion, letting them move and make battle unseen. 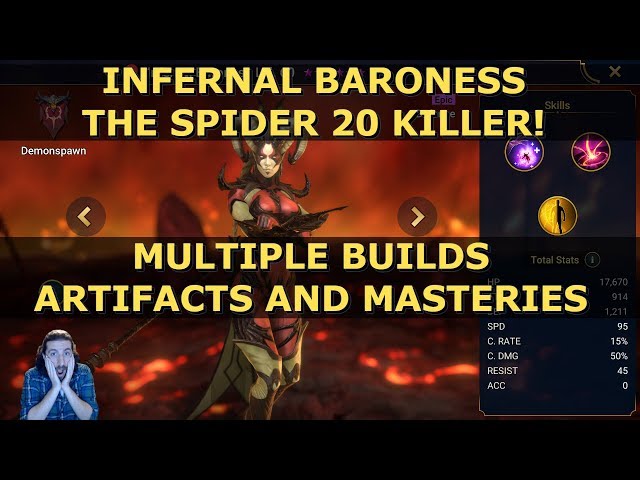