Sigmund the Highshield is a Legendary Defense Magic champion from Banner Lords faction in Raid Shadow Legends. Sigmund the Highshield was introduced in Patch 4.70 as part of the Hybrid Champion Fusion Event starting late September 2021. To obtain Sigmund the Highshield from the event, you need to fuse Duhr the Hungerer, Thylessia, Scabrius and Demytha. Sigmund’s skill revolves around protecting allies and crowd-controlling enemies while minimizing the damage dealt by the enemies, which makes him a great candidate for an account-progression champion.

Sigmund’s Fairer Fight (A1 Skill) is his default attack that has the ability to remove Shield buff and an additional random buff. This skill makes it easy to counter against bosses who specialize in buffing themselves, especially the bosses for Potion Keeps (Magic Keep, Spirit Keep, Arcane Keep, and Force Keep). He has a unique passive skill Equitable that acts as a secondary buff removal mechanic, which is great for removing buff from enemies who are mobbing him or receiving the enemy’s AoE attacks without him lifting a finger! This skill synergizes well with Battlefield Beacon (A2 Skill) where he provokes the enemies to attack him while simultaneously reducing their damage output by inflicting Decrease Attack debuff. In addition, he has Shield of the Realm (A3 Skill) that increases allies survivability by applying Strengthen and Shield buff on them, so they won’t easily get knock-out from battle by enemies nuke attacks. Last but not least, he has a useful Defense Aura battle for Doom Tower to reduce damage received from enemy attacks.

Overall, Sigmund the Highshield is a decent Legendary champion who can help carry you in many areas of the game if you do not have better carry champions such as Krisk the Ageless, Duchess the Lilitu, Riho Bonespear or Tuhanarak. To unleash his full potential, he will need sufficient Accuracy to apply his debuff along with an ample amount of Health and Defense to tank the damage, based on the difficulty of the content you are encountering.

Should you fuse Sigmund the Highshield or keep the Epic champions?
I would recommend you to fuse Sigmund the Highshield if you do not have a carry champion who protects your team from danger and increases your survivability significantly, especially for end-game content such as Doom Tower. However, if you do not have the resources to level and ascend the Epics to fuse him, or you are stuck in Faction Wars due to a lack of specific champions (e.g. reviver, protector, healer), then I would advise keeping the Epic champions instead.

Since this is a hybrid champion fusion event, which involves collecting fragments to summon Epic champions and fusing Epic champions into Legendary, I suggest you hold off summoning the fragments for the upcoming Halloween Champion Fusion event to effortlessly rack up points during the Champion Chase Tournament whenever you receive a champion from fragments, summoning shards, marketplace or farming campaign. Only do this if you are not going for the Legendary champion!

Equitable [Passive]
Whenever this Champion is attacked, has a 20% chance of decreasing the duration of all buffs on the attacker by 1 turn. Has a 40% chance instead when attacked by a Boss.

Here is Sigmund the Highshield masteries as an all-rounder build for all areas in the game without requiring any specific speed-tuning for a particular team composition. If you wish to use him in a speed-tuned team for Clan Boss, I would recommend selecting Single Out, Life Drinker and Swarm Smiter for Tier 3 masteries to prevent him to gaining extra Turn Meter from expiration of buffs and debuffs that he applied. Here are Sigmund the Highshield artifacts and masteries optimized by Skratch as a provoker tanker for Arena, Dungeons, Doom Tower and Faction Wars. Sigmund is equipped with Regeneration Set and Immortal Set to enable him to recover his Health after being attacked by the enemies who he provoked since he does not have any skills to heal himself to sustain in a long battle by himself. The stats prioritized for Sigmund are Health, Defense, Accuracy, and Speed, with a decent amount of Critical Rate and Critical Damage to deal some damage. 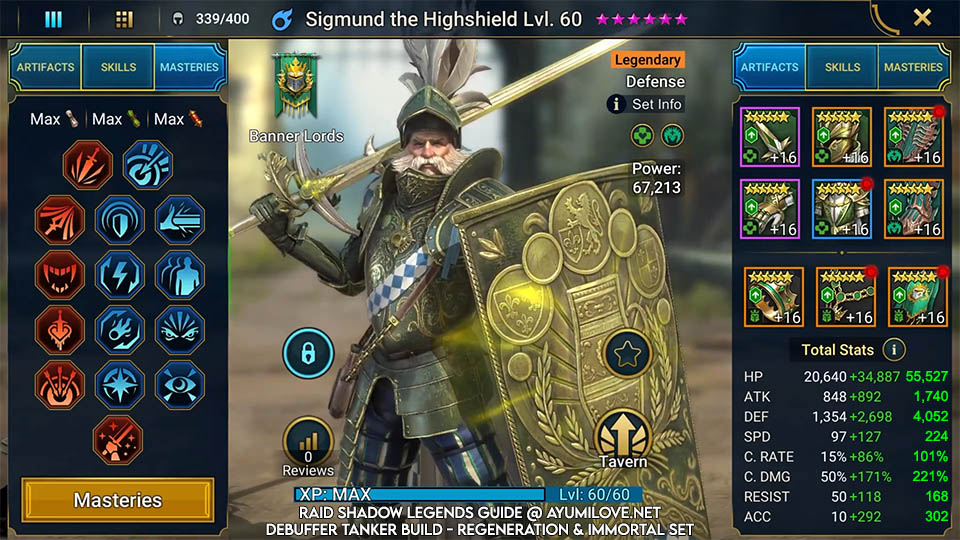 Skratch: Why Sigmund the Highshield Is an Easy Pass for Me? | Champion Spotlight & Build. 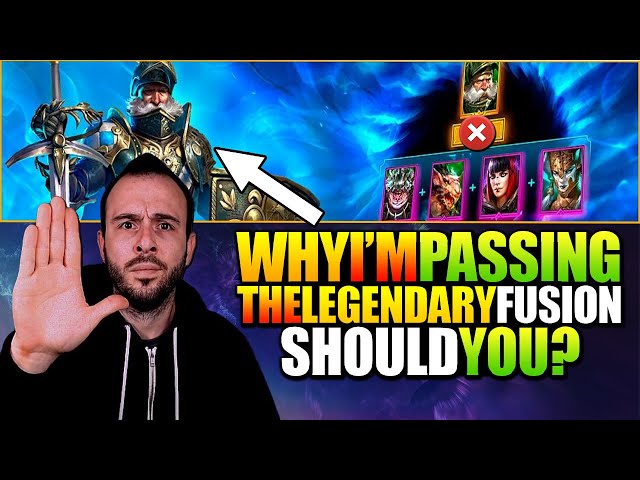