Pre-requisite: Taurus to be equipped with Lifesteal Set for Clan Boss, whereas Accuracy Set and Speed Set are recommended for Dungeons and Faction Wars. Taurus requires high amount of Accuracy to inflict Poison debuff on enemies, and sufficient Speed to go at least twice of the enemies turn with the aid of Support Champion who can provide Increase Speed buff. The Poison deals damage over time (DoT) and works best against high HP enemies at higher level dungeon stages. The key is to keep Taurus alive with Heal and Revive, so he can apply many Poison debuff to the enemies. Take note that a champion can only have at most 10 debuff at any point of time. Therefore, using more than 2 Taurus in a battle will not be beneficial. Taurus does not have any nuking skill but paired with a champion who can explode those Poisons debuff will be devastating. Though Skinwalkers at large lack the secrets of steel or alchemy to truly challenge the powerful nations of Teleria, ancient tribal lore and knowledge of the land allow them to improvise. Thus the Taurus, in addition to his brute strength, has access to potent poisons crafted by the tribe’s shamans any venomous component they can find – be it a corrupted plant or a giant spider’s powdered mandibles. Such concoctions can be extremely virulent, if volatile and prone to poisoning the warrior using them as well as the intended targets. Though sheer animalistic toughness allows the Taurus to withstand the worst of the effects, having means of healing on hand is never a bad idea for any Warrior wishing to employ such tactics. 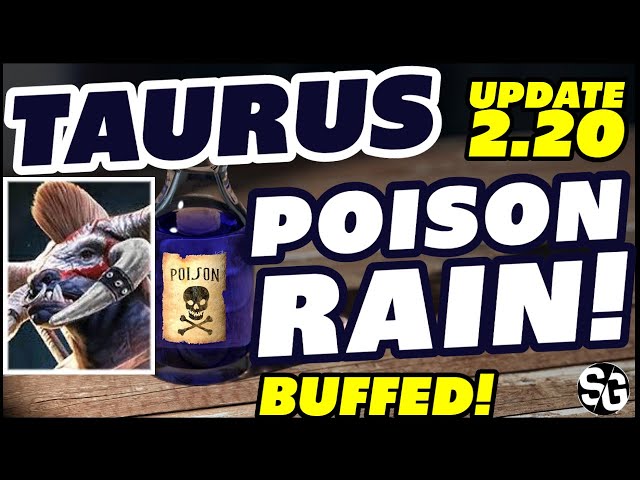