Raid Shadow Legends Infinity Shield Clan Boss Team also known as Agents of Shield or Infinity Chaos or Infinity Gauntlet is developed by Sharky’s Compass. This team comprises Underpriest Brogni who has the ability to increase existing shield capacity and Increase Buff Duration champions such as Krisk the Ageless and Lanakis the Chosen to extend the buff duration.

The order should go by applying all buffs then extending them:

In this video, Sharky describes how he discovered this Infinity Shield, and then explains the artifact set, masteries and stats he uses for his champions in this team setup. Apart from that, he also covers the team sequence and skills that needs to be prioritized before setting it on auto battle.

Here is Underpriest Brogni’s artifacts and masteries by Sharky optimized for Infinity Shield Clan Boss. Brogni is equipped in Toxic Set to enable him to apply Poison debuff on enemies whenever he attacks the Clan Boss with direct damage from his skills or Giant Slayer mastery. The stats to prioritize on Brogni are Critical Rate, Critical Damage and Attack, followed by Speed and Defense. Brogni’s Accuracy is set low on purpose to prevent him from overriding Geomancer’s HP Burn debuff in this team composition (Krisk, Lanakis, Brogni and Geomancer). Reason being, Geomancer’s passive skill will only work to reflect damage from allies if the HP Burn debuff is placed no other than Geomancer. Brogni is build in high damage to allow him to deal massive amount of damage as a portion of the damage is translated to Shield Growth through his Cavern’s Grasp (A2 skill). 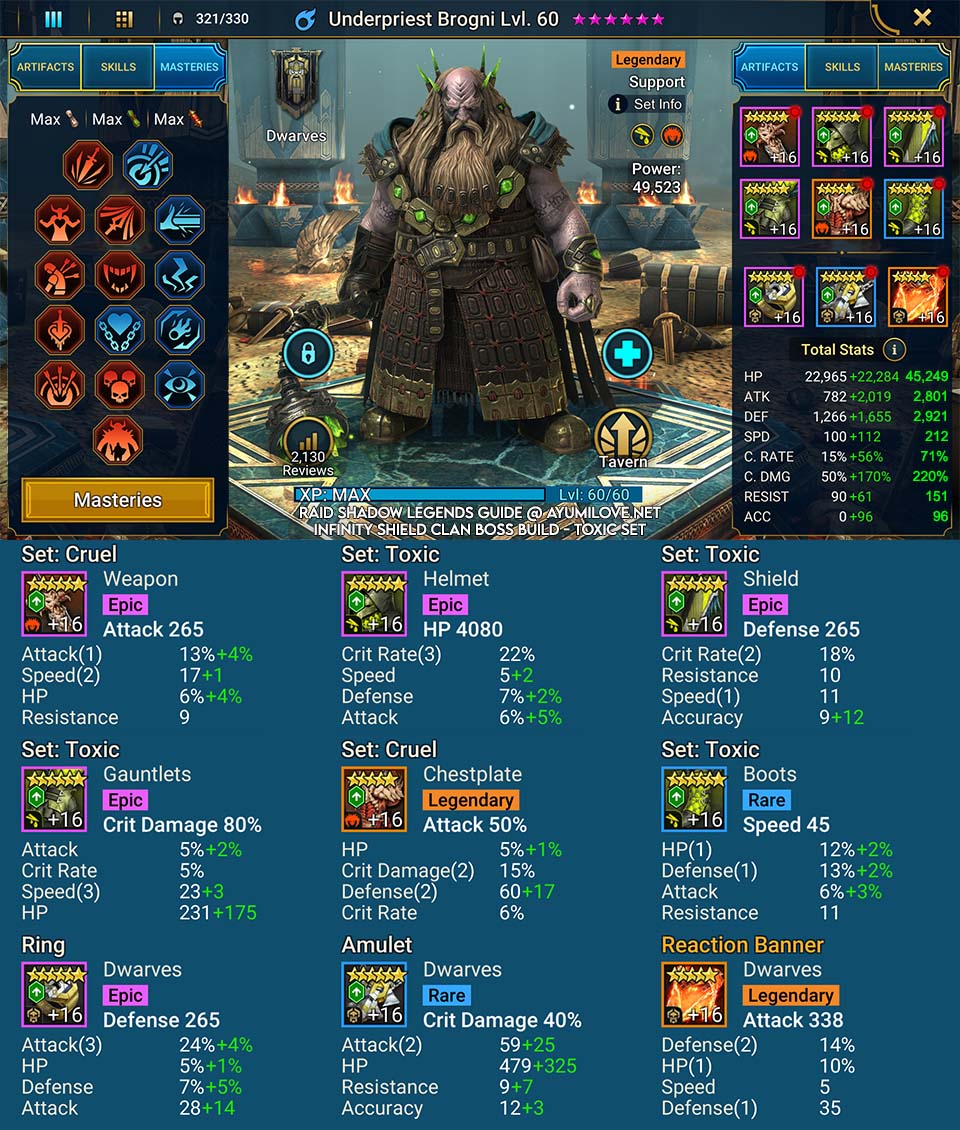 Here is Krisk the Ageless’s artifacts and masteries by Sharky optimized for Infinity Shield Clan Boss. Krisk is equipped in Stalwart Set to decrease the damage taken from Clan Boss AoE attacks. The stats to prioritized for Krisk are Defense, Speed, Accuracy and a decent amount of Health. The masteries selected are Offense Mastery Tree and Support Mastery Tree to increase Krisk’s overall damage output and increase his Accuracy stats. The Support masteries also enhances his success rate of applying his debuffs, increases the debuff duration and have a chance to reduce a random skill cooldown by 1 turn especially for his Centuried Vigor that it is used to increase the ally buffs duration. 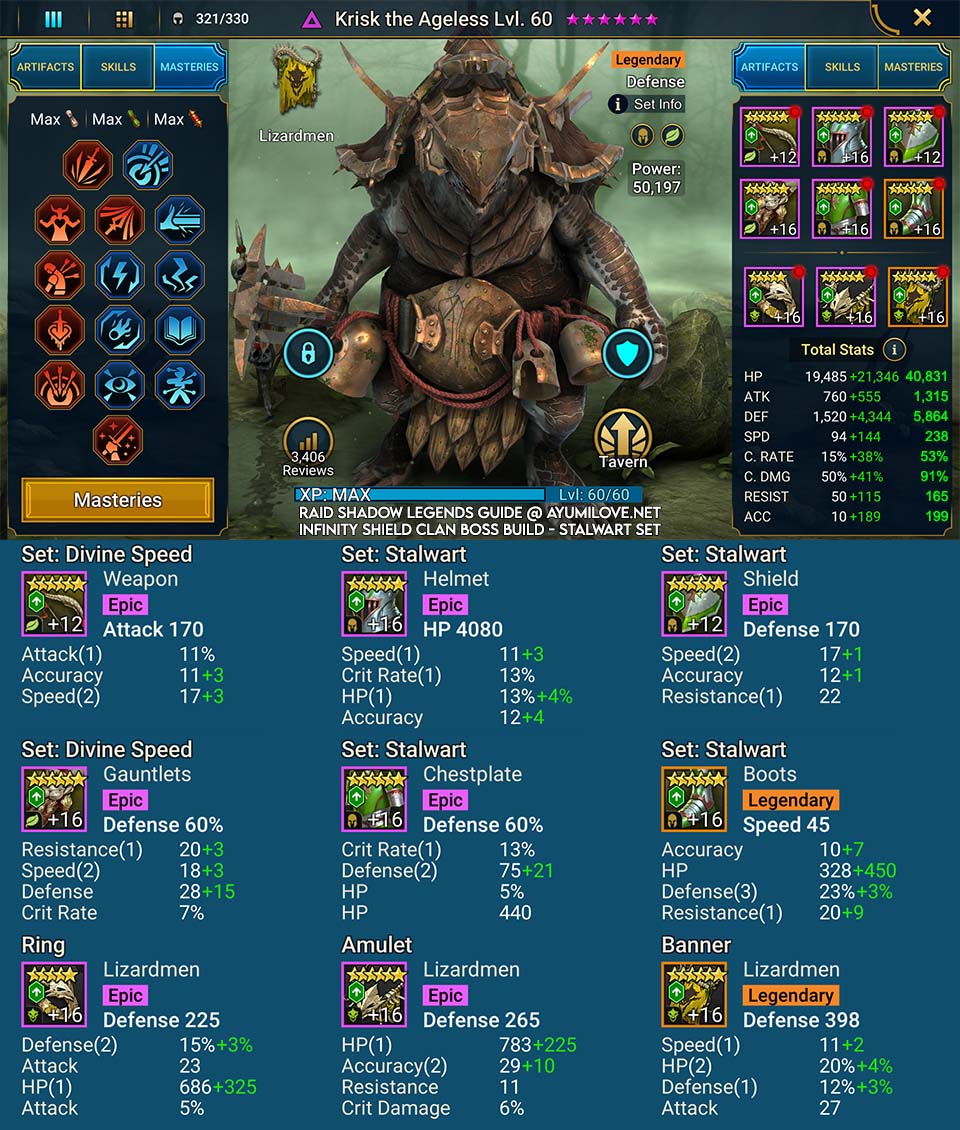 Here is Lanakis the Chosen’s artifacts and masteries by Sharky optimized for Infinity Shield Clan Boss. Lanakis is equipped in Reflex Set to enable her to have a 40% chance to reduce a random skill cooldown. Using the AI preset, it’s recommended to disable Banner of Legend (A3 Skill), so that the Reflex Set will only reduce the cooldown of Companions of Fate (A2 Skill). Her A2 skill is essential for keeping the Shield buff up all the time! The stats to prioritize for Lanakis are Critical Damage, Attack, Defense and Critical Rate to boost her overall damage output while Defense stats to reduce the damage taken. The masteries selected for Lanakis are similar to Krisk the Ageless, which focuses on Offense Tree Mastery and Support Tree Mastery to unlock Warmaster and Cycle of Magic. 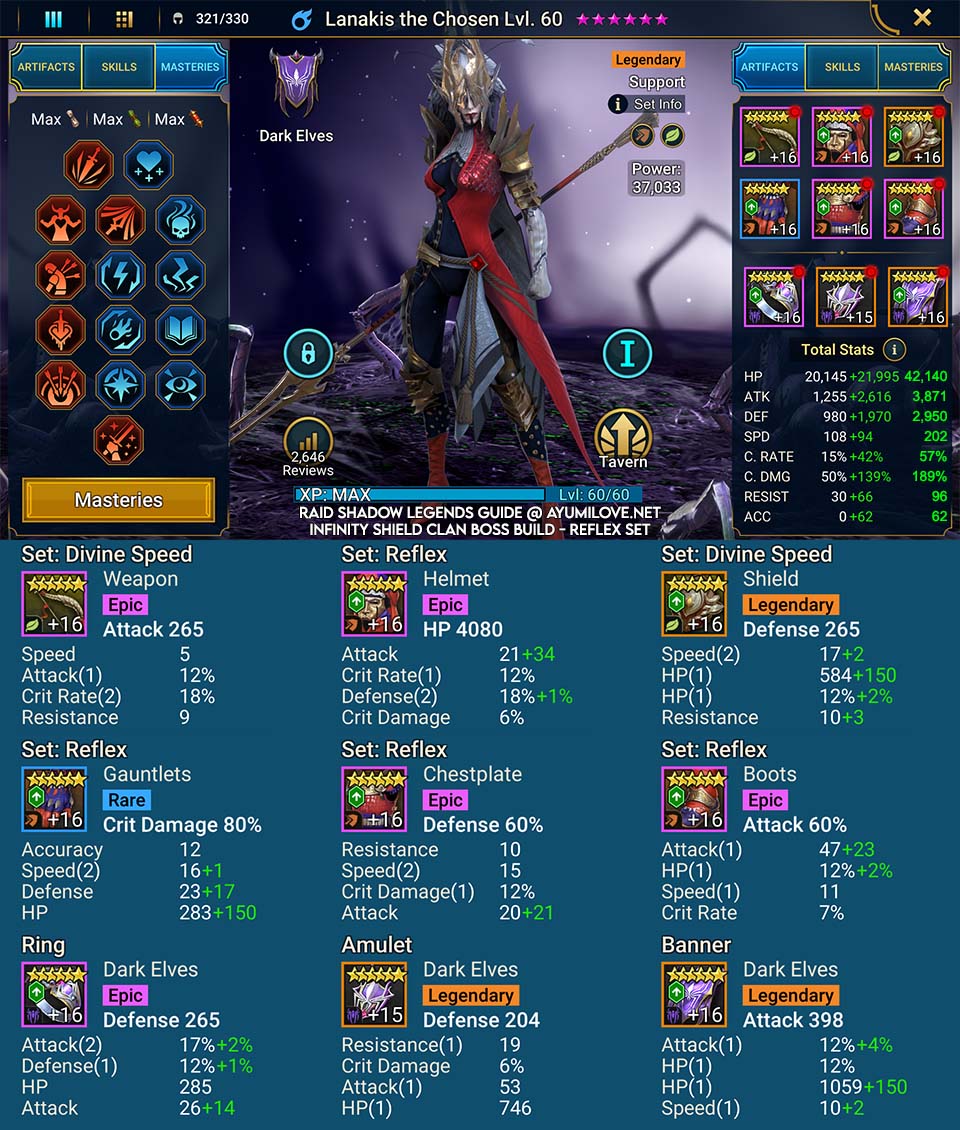 Here is the second Lanakis the Chosen’s artifacts and masteries by Sharky optimized for Infinity Shield Clan Boss. This build is basically the same as the first Lanakis, where she uses the same masteries and equipped in Reflex Set. You will not need to achieve 100% Critical Rate on your champions as her Banner of Legend (A3 Skill) provides a 30% Increase Critical Rate buff and 50% Increase Attack buff. These buffs will last as long as you can extend the buffs in time! The Banner of Legend skill needs to be activated once by setting it as the Opener skill on the fastest Lanakis (Build #1), and disabled for the remainder of the battle turns using the AI Preset. 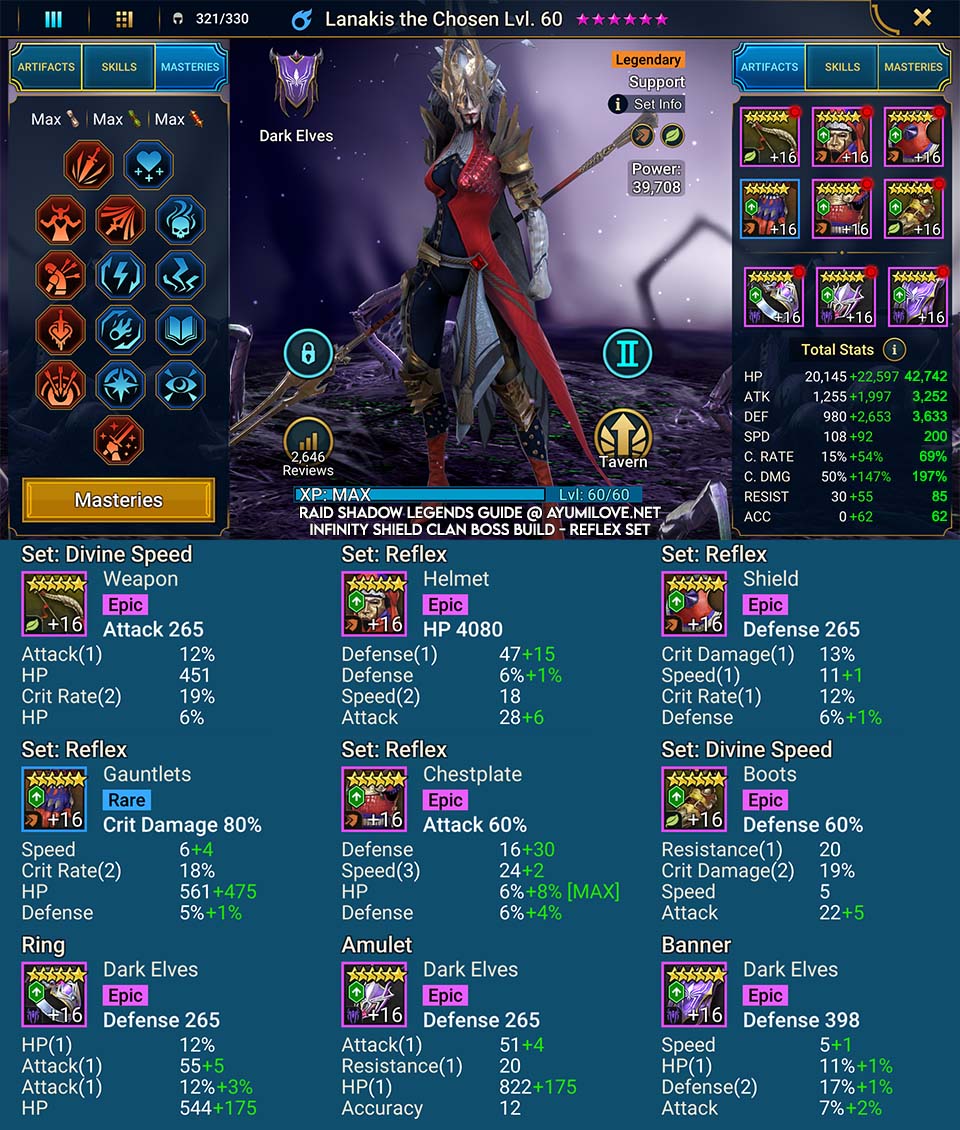 Here is Geomancer’s artifacts and masteries by Sharky optimized for Infinity Shield Clan Boss. Geomancer is equipped in Shield Set to provide the second layer of Shield, so that Underpriest Brogni can grow both shields at the same time with his Cavern’s Grasp (A2 Skill). The stats to prioritize on Geomancer are Defense, Speed, Accuracy to allow him to take minimal damage and able to successfully apply his HP Burn debuff, which is crucial in allowing him to reflect damage and proc his Giant Slayer mastery. The masteries recommended being picked for Geomancer are Offense Mastery Tree and Support Mastery Tree to unlock Giant Slayer, Cycle of Magic and Master Hexer (increase debuff duration). 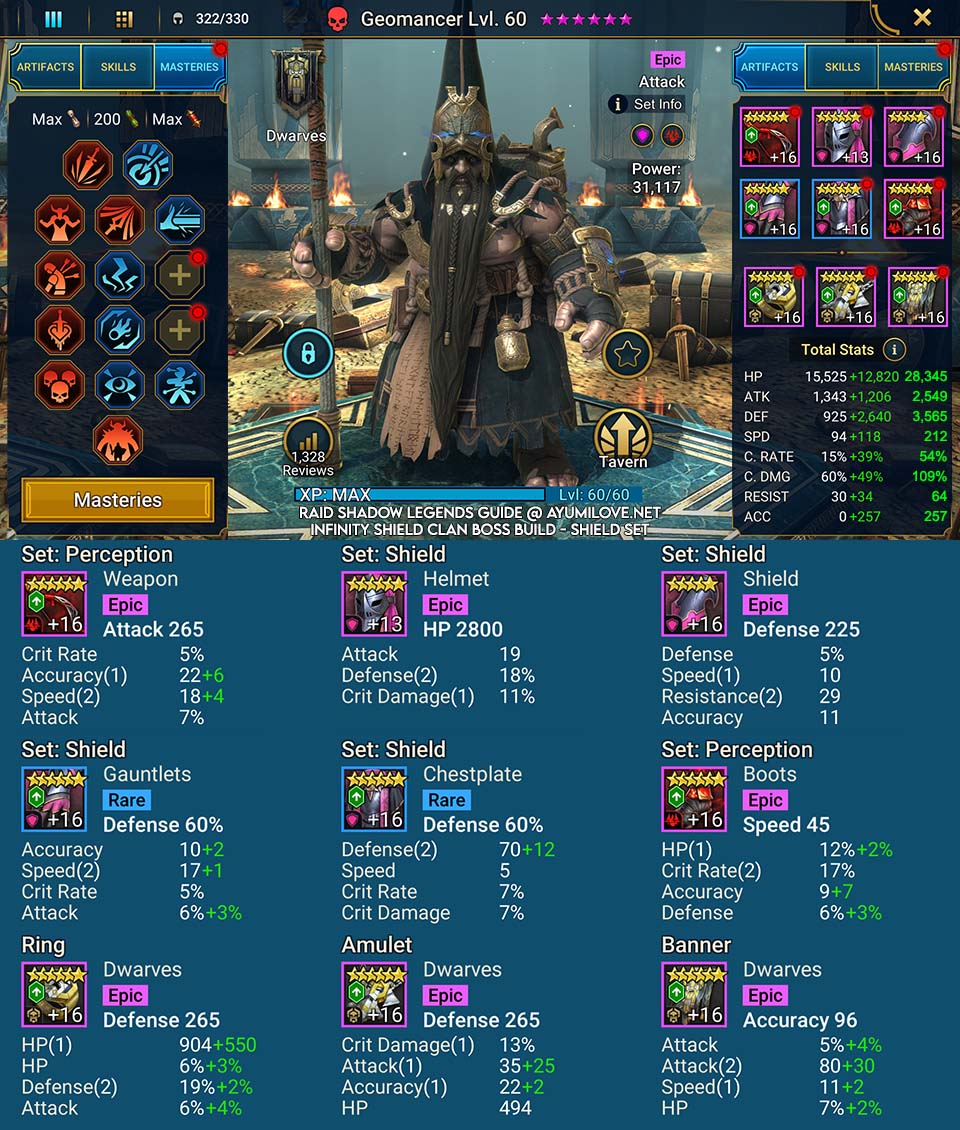 What are the new customization in this team?

Here is a video where VictorTES showcasing his improvised Infinity Team composition created by Sharky, where he explains the champions he used as well as the artifacts and masteries for each champion. 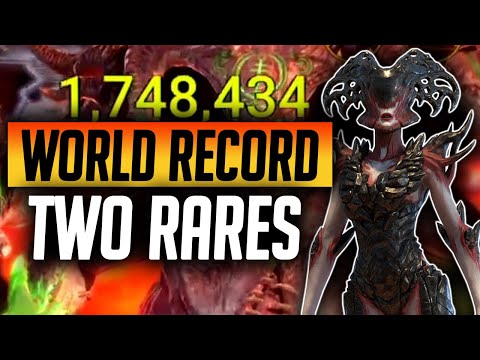 Here is a video where DeadwoodJedi explores on using Epic Champions as buff extenders paired with Lydia the Deathsiren, Underpriest Brogni and Corpulent Cadaver! 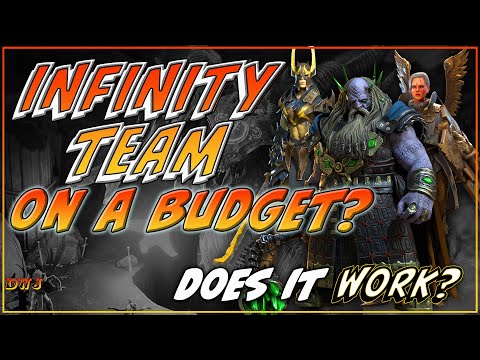