Pirate can advanced as a Buccaneer or Corsair. This specific job route is determined when you reach Level 30. For this job, you will undergo as Gunslinger (2nd Job Advancement), Outlaw (3rd Job Advancement) and Corsair (4th Job Advancement). Corsair is one of Pirate subclass that uses guns to shoot down their enemies in long-range combat. They have mix traits of a Bowman (far range combat) and Thief (agile attacks). 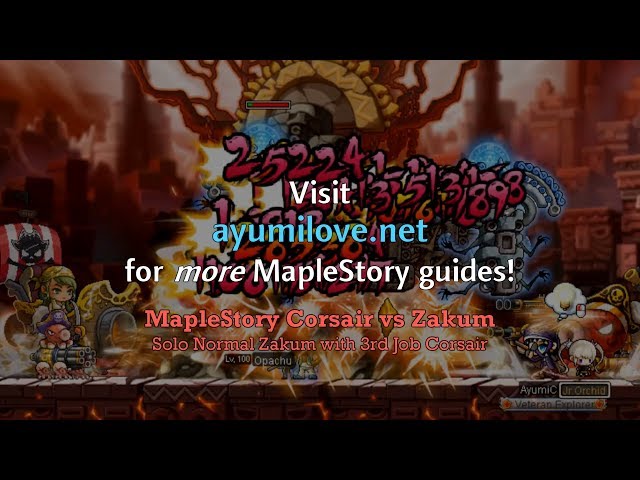 Please refer to Pirate 1st Job Skill Build as it is shared by Corsair and Buccaneer.

Explanation:
Broadside does not require any SP (Skill Points) as its skill level automatically syncs with Rapid Fire! Therefore, Broadside is not listed in the skill build. Corsair 4th Job primary attacking skill will be Eight-Legs Easton which is used mostly for training purposes, whereas Rapid Fire (Broadside) for bossing. If you plan to boss early, you can max this skill earlier otherwise, max the passive skills to provide damage boost to all skills. To start off, add 1 SP into both Rapid Fire and Eight-Legs Easton. Next, max Double Down as it only requires 5 SP to gain more benefits of Roll of the Dice! Then, max Ahoy Mateys for the Weapon Attack bonus and Crew Member bonuses. Start maxing Eight-Legs Easton to kill enemies faster in training and shrink the minimum and maximum damage gap with maxed Majestic Presence. With Majestic Presence, your bomb in Broadside will gain most benefit from explosion damage which you will be maxing Rapid Fire after it. Move on to maxing Pirate’s Revenge and Jolly Roger. These 2 skills pair up nicely. You want enemies to easily hit you so you can activate Pirate’s Revenge additional damage for a couple of seconds. Max Maple Warrior before Quickdraw since its boost your damage based on your AP (Ability Points in primary stat) whereas Quickdraw occurs randomly. You can max Parrotargetting after Maple Warrior for more bossing damage! Finally, you can max Nautilus Strikes and Brain Scrambler last since you can use Rapid Fire (Broadside) for bossing without any delay.