MapleStory’s first monster job, the Super Star Pink Bean has been added to the test server! This job is a bit different but still has a lot of funny skills, read on for more information! Pink Bean Job is released on KMS server on May 14 2015! The always bored Pink Bean has been sent to Henesys instead of the Temple of Time due to the plans of his rival, Black Bean! Pink Bean job is first released in GMS on August 19, 2015 and ends on October 6, 2015. 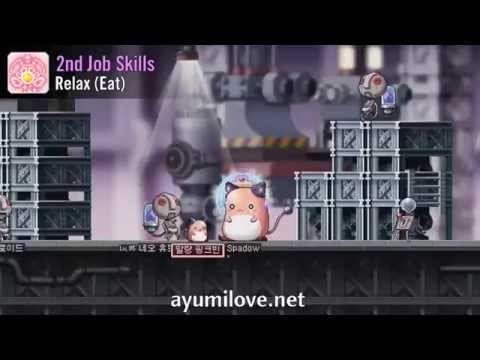 Umbrella (Active)
Skill Unlocked: Level 10
Pink Bean opens his umbrella to fall slowly while in the air. While the skill key is held down, your falling speed will be reduced by 50.
Level 1: MP Cost: 10, Can only be used in the air.

Pink Shadow | Pinkish Shadow (Supportive)
Skill Unlocked: Level 160
Infatuated with Shadow Play, Pink Bean summons pink shadows that mimic your actions with a short delay. The shadows do not mimic some movement skills. They mimic summon and bufff skills, but these have no effect. You can see only shadows that belatedly mimic the skills when you look back sensing somebody’s presence. Wait, does Shadow normally move slow? Attacks by shadow ignore Damage Reflection.
Level 1: Consumes 100 MP to summon a shadow that inflicts 15% of their final daamge for 180 seconds. Can summon up to 3 shadows and cast while hanging. Cooldown: 60 seconds.

Where To, Sir?
Maple ID Reward: What World Are You Going To? title
Pink Bean Reward: 30 Day Flying with Pink Bean Riding

The hidden requirements are:

30+ Intimacy
(I’m not quite sure, but the Korean word is the one they use for our pet stat ‘Closeness’)
Maple ID Reward: I Have No Friends title
Pink Bean Reward: 3 Pink Power Buff Coupons