Ciara is a Legendary Offense Water hero from Soulplunders in Awaken Chaos Era. She can be obtained as a reward by completing Covenants challenges or summoning her from Advanced Summoning Shards! Ciara’s skills revolve around amplifying the damage taken by the enemies, raising her damage potential, and performing an abrupt attack against the enemy whenever their health drops below 50% due to DoT (Damage over Time) debuff such as Bleeding, Ignite, Poison damage, or your allies damage dealt with them.

Soulstealer is Ciara’s unique trait that raises her Attack stats for every Vengeful Spirit she gains whenever an enemy is defeated up to a maximum of 6 stacks. With this buff, she can boost her damage up along with the Attack Up buff. Ciara is best synergized with AoE nukers such as Nathalia, Valeria, Hydrissea or Evera to quickly rack up her Vengeful Spirits.

Dark Shreds is her basic ability that attacks an enemy and applies Increase Damage Taken to the target. It’s recommended to speed tune her to go first to apply this debuff, so the rest of your allies can take advantage of this debuff to deal extra damage to the enemy. Otherwise, the debuff expires once the enemy takes their turn after Ciara applies it to them as it only lasts 1 turn.

Dark Spread is Ciara’s signature passive skill that deals damage instantly to the enemy whose health drops below 50%. This ability makes her one of the best heroes for speed farming Adventure stages, clearing the mobs of enemies in No Man’s Land dungeons and Arcane Dominator dungeons.

Darkness Fall is her ultimate ability that attacks all enemies on the battlefield. If you are mainly using Ciara as your debuffer for your speed run, then it’s advisable to speed tune her to go before your AoE nukers, so she can perform the finishing blow on the enemy with her Dark Spread.

Check out the best build for Ciara with gears and stats!

The recommended stats to prioritize on Ciara are Attack, Critical Rate, Critical Damage, Focus, and Speed. Attack, Critical Rate, and Critical Damage are important stats for Attacker heroes to deal an enormous amount of damage to their target. Focus is important for her to inflict the Increase Damage Taken on the enemy while Speed is required to go after the enemy. The best gear for Ciara as an Attacker and Debuffer is Assassin Set and Warrior Set. Assassin Set allows Ciara to have a 50% chance to boost her damage by 35% on both of her single-target attacks, AoE attacks, and passive ability attack, while Warrior Set provides her an additional Attack stats. Ciara’s early life was characterized by an absurd mix of privilege as a member of the nobility and powerlessness as a woman living under the highly patriarchal society of the Hirschbuck Empire. As Ciara noted with bitter irony, commoner imperials and peasant folk were often blessed with freer, more independent lives than the relative highborn. She came to appreciate this fact through the loveless marriage forced upon her mother and the tragic death of her betrothed sister. Ciara knew that any hope of relieving her plight would have to come through magic – the ultimate meritocracy that allowed spellcasters of any background to transcend their circumstances. Ciara spent long nights obsessively studying the magical arts, building a powerful skill set that could realistically grant her an independent life within the harsh Imperial society. Ciara’s drive and determination did not go unnoticed by High Priestess Valeria, who took the most unusual step of seeking a private audience with Ciara in her chambers at the Academy.

Valeria revealed the full extent of the power she could access simply by bending the knee to the Dark One, an offer the desperate and somewhat ruthless young noblewoman was only too eager to accept. Her father’s ham-fisted attempt to cement the family’s fortunes by marrying Ciara off to the same cruel prince whose disrespect had been the original cause of her older sister’s death became the grim occasion by which the public learned of Ciara’s frightening new powers. Ciara played the part of an obedient aristocrat by attending the engagement banquet.

She chose her acceptance speech as the moment to reveal her newly acquired skills, unleashing a hellfire of fire magic against her betrothed’s family which the royal house guards were powerless to prevent. This infamous massacre forever cut Ciara off from the society of her birth. She fled the Imperial Enforcer Mages under cover of night and threw herself upon Valeria, who took the aspiring but rather bloodthirsty young mage under her wing. Ciara has pledged herself to Valeria and to the Dark, and even now works in the shadows on behalf of Nicklaus and his grand plan. 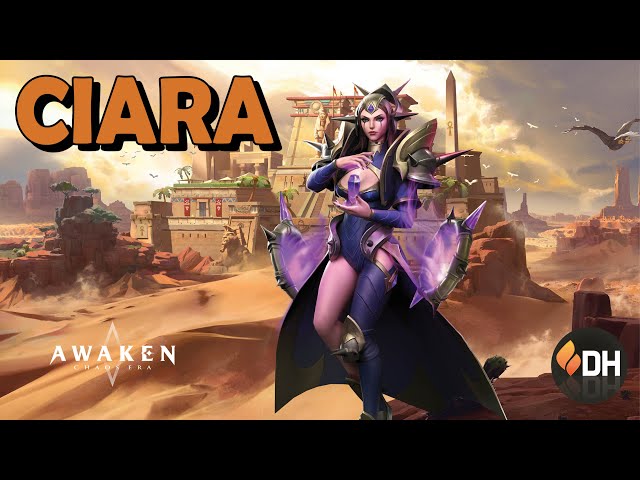