Vance is an Epic Offense Wood hero from Free Cities in Awaken Chaos Era. His skills revolve around dealing a massive amount of single-target damage against enemies who applies a high amount of buffs to boost their offensive and defensive capabilities. Vance is capable of ignoring the enemy’s buffs, copying their buffs to himself, gaining a bonus turn whenever non-boss enemies buff themselves and inflicting extra damage to enemies with his ultimate as it scales based on the number of buffs they have.

Sinbreaker is Vance’s unique trait that allows him to gain a bonus turn whenever he gains 5 Rage. When an enemy receives a buff, this will increase Vance’s Rage meter by 1. However, this trait does not trigger when the boss receives a buff, which makes him not useful against bosses in Arcane Dominator and No Man’s Land dungeons. Upon ascending to the second Ascension, he unlocks ignore positive effects on the target, making him one of the best heroes for PvP (Player vs Player) against Arena tank team that relies heavily on buffs to sustain themselves.

Sign of the Cross is his basic attack that deals damage to an enemy and grants a bonus attack when the target has 2 or more buffs. Hence, it’s recommended to prioritize enemies that have at least 2 buffs on them to deal the maximum amount of damage to the target and copy their buffs with his Inquisition basic ability. Do take note that buffs that have the golden frame around it (unique buff) cannot be copied nor be treated as a regular buff, which will not proc Inquisition! For example, Tashir’s Speed Up buff cast to her allies from her trait.

Blademaster’s Blessing is Vance’s special ability that enables him to survive a fatal hit from enemies. When his health drops below zero, he instantly has his health replenished by 16% of his Max Health, and the health recovery is amplified based on the amount of Rage he has! With this passive skill, he has a chance to retaliate against the enemy who nuked him down. However, this passive skill has a 3 turn cooldown. To speed up the skill cooldown of his passive, take out their support enemies last as their buffs quickly fill up Vance’s Rage meter to gain a bonus turn!

Demonsword Devour is his ultimate ability that deals a significant amount of damage as it scales based on the enemies buff! You can use this to quickly takeout the enemy’s backbone support hero such as Mytheasia or Blackhorn who keeps the team alive for a long period of time.

Overall, Vance is a decent Epic hero who is a must-have for Arena Players who needs a solid attacker to take down their opponent’s defenses easily. To unleash Vance’s full potential, provide him with a high amount of Attack, Critical Rate, and Critical Damage stats. Precision is optional but useful to prevent Vance’s attacks from being deflected, especially at the higher tier of Arena (Platinum & Diamond Tier). I would recommend gearing Vance in a Cursed Set to fully utilize the bonus turns he gained from his trait, so he can perform a bonus attack from the gear set on top of the Inquisition’s bonus attack skill.

Sinbreaker (Trait → Ascension 2)
Grants 1 Rage per positive effect applied to an enemy as well as a bonus turn upon reaching 5 Rage. (Ascension → Attacks ignore Defense Up, Damage Reduction, or Shield on the target.)

Vance grew up in the loveless home of his uncle, bereft of a mother from childbirth and a father who died from a witch’s black magic during an unsuccessful arrest attempt. Vance quickly learned to love his own company in response to the jealous rage he suffered daily at the hands of his step-aunt, which he then expressed in the abuse of smaller animals weaker than himself.

Vance grew up a confident swordsman, but ineligible for the Royal Cavalry thanks to his poor family background. He turned to the Order of Clerics instead. A hard-nosed sceptic, Vance was clearly inappropriate for any type of religious order, but found a much more suitable calling in an alternative combat-focused branch: the Witch Hunters. The Witch Hunters provided Vance with effectively his dream job: the task of hunting down witches throughout the Empire and sometimes further afield with his cross-shaped sword and clerical spells. Vance earned considerable notoriety as a sadistic Witch Hunter, but even this claim to fame has been utterly surpassed in recent years by the terrifying but beautiful Archcleric, Valeria.

Vance was instantly smitten by Her Holiness and has hung onto Valeria’s every word ever since. As one of the few individuals in Aurelica to learn of Valeria’s true allegiances when presented with a demon-enchanted sword from his clerical master, Vance is long past caring for Valeria’s intentions toward the Order, Empire, or how she came into the possession of such artifacts. In Vance’s eyes, Valeria is more akin to a goddess than a mere mortal, and he is willing to do whatever it takes – even sacrifice the kingdoms of humanity – to please his temptress. 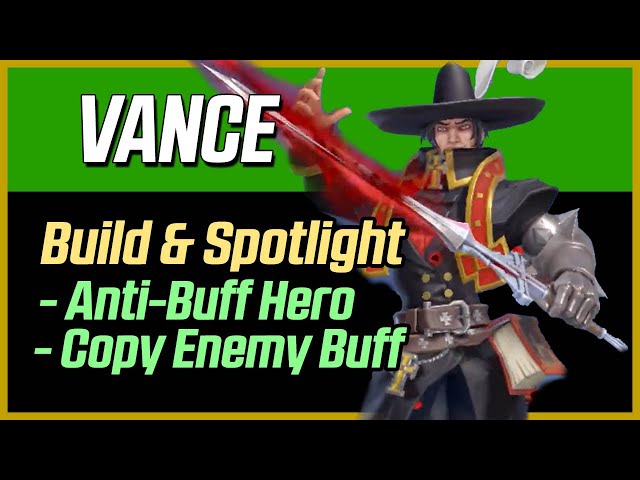