Hugh is an Epic Offense Wood hero from Lasier in Awaken Chaos Era. Hugh skill kit revolves around inflicting Speed Down on enemies and counterattacking them if they are lower speed than him whenever they perform an attack to any of your allies. He has a strong single-target ultimate ability along with a decent AoE damage special ability.

Elite Swordsmanship is his unique trait that enables Hugh to counterattack an enemy whenever they perform any hits on your team members if they are lower speed than him. Hence, I would recommend providing him with sufficient speed through gear substats to trigger this trait. He requires Ascension 5 to raise the chances of counterattacking from 50% to 100%. It’s a good counter against Antinua to prevent her from gaining a bonus attack with her Unicorn Blessing.

Joint Fury is Hugh’s basic ability that attacks an enemy and the damage increases with the more Speed he gets. Windstrex makes a good pair with him as she can provide Speed Up buff to all allies in the squad. Alternatively, Joseph could also provide Speed buff to him if Hugh is geared to have the highest Attack stats in the battle squad!

Spiral Slash is his special ability that attacks all enemies in the battlefield and has a chance to inflict Speed Down on them. There aren’t many heroes in the game that are capable of applying AoE Speed Down to all enemies apart from Hydrissea and Tia. This skill is useful in forming an Adventure speed farming team with Nathalia, Joseph and Zatlux.

Blade Dance is Hugh’s ultimate single-target nuking ability, which is able to ignore 50% of the enemy defense if their speed is lower than his. It’s useful in quickly taking out tanky and high health heroes with this skill.

Overall, Hugh is a decent hero who can help you speed farm Adventure Mythic along with Zatlux, Nathalia and Joseph. He will be quite valuable for players who started out with Mytheasia as their Rookie Summon Legendary Hero rather than the popular AoE Nuker Legendary such as Valeria, Evera and Hydrissea.

Elite Swordsmanship (Trait → Ascension)
Whenever an enemy with a Speed lower than this character’s attacks, there is a (50% → 100%) chance for this character to counterattack.

The recommended gears to equip on Hugh are Rage Set and Terra Set to boost both of his damage and survivability for Speed Farming Adventure Mythic stages. The stats prioritized for Hugh as an attacker and debuffer hero are Focus, Attack%, Critical Rate, Critical Damage and some Speed. This enables him to deal high damage with his Spiral Slash (AoE Attack) and Blade Dance (Single-Target Nuke Attack) as well as the ability to apply AoE Speed Down on enemies for Speed Farming Adventure chapters. Terra Set provides him additional health to allow him to tank a few hits from enemies without getting knockout easily. It’s not necessary to equip Hugh with Speed boots as he has a very high base speed stat. 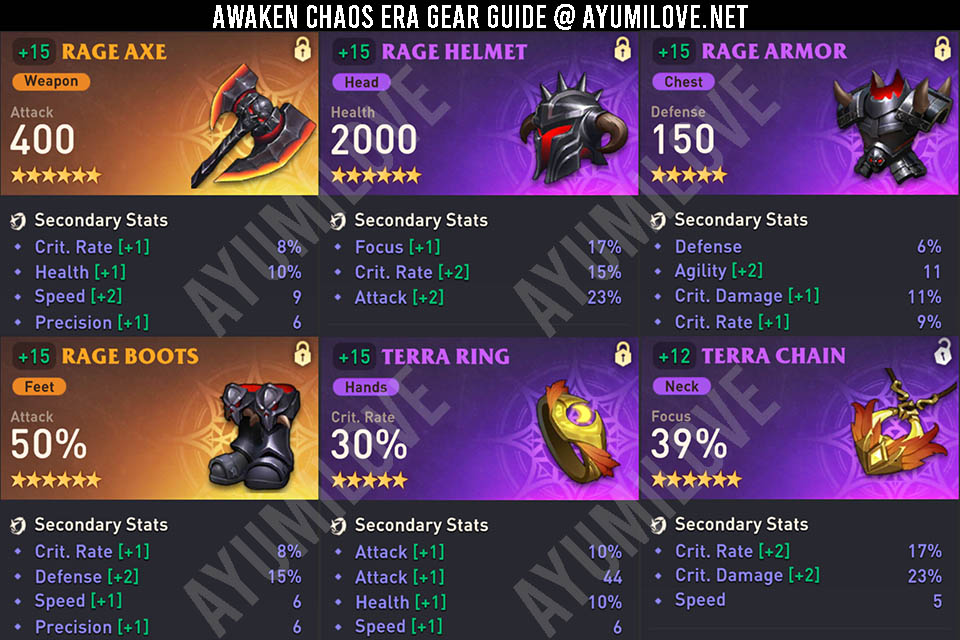 Hugh spent his adolescence years practicing swordsmanship and squiring for some of the best knights of Lasir. This, combined with his natural talent, soon earned him the nickname “Windwalker” for his incredible speed with the blade. A frequent combatant at jousts and duels, Hugh formed a reasonably close friendship with the great sword-wielding Zachary throughout their frequent associations at various sparring events. The friends have taken very different paths in life, however.

A patriot, Hugh was quick to enlist in the Duke’s Guard under Nicklaus, and quickly ascended to the rank of Commander of the Guard in recognition of his many talents, both on and off the field. Hugh’s deep admiration for the duke has turned to horror by slow degrees in light of his seeming Faustian bargain for power at the expense of the Light. Loyal to a fault, the encroaching darkness at the heart of Lasir’s strange new court may force Hugh into an unimaginable new course of action…