Godfery is a Legendary Support Wood hero from Sylvan Woodlands in Awaken Chaos Era. Godfery the Sage of Sylvan was released on 3rd February 2022 as the first Legendary hero with a Time-Limited Summoning Event to get him at 3X the rate with 7 days login reward! Godfery was also made available via Magic Pass Season 10! His skill kit revolves around inflicting Defense Down and Unhealable on the enemy, stealing a random buff and distributing it to all allies, and countering enemies who rely heavily on buffs to increase their offense and defense capabilities.

Ragestatis is Godfery’s unique trait that allows him to deal damage to the enemy who receives a buff aka positive effect while simultaneously extending their ultimate cooldown by 1 turn. This is a great counter against enemies who are faster than you, especially in Arena PvP where they boost themselves with Attack Up and Speed Up before nuking your team. However, the downside of this skill is if the opponent uses William for Counterattack buff, it triggers Godfery passive skill to attack them, but it leads to all enemies hitting him. This trait will not be triggered if the buff is applied through Spell (e.g. Gaia’s Renewal) or Hero’s unique buff (e.g. Antinua Unicorn Blessing)

Onslaught is his basic ability that attack an enemy while simultaneously applying Defense Down debuff to reduce their defenses, so that your allies can inflict more damage to them. With this ability having a 100% chance to apply, you can have Godfery in your permanently have the enemy’s defense lowered on every round consistently.

Sufficiency is Godfery’s ultimate ability that attacks an enemy and transfers a random positive effect aka buff from them to all of your allies in the squad before removing all of the buffs from the target. This is a powerful ability to use the opponent’s buff against them and reduce their ability to defend themselves with the buff they have or improve their damage against your team. In addition, it can steal Spell buff such as Shield of Mercy and Gaia’s Renewal. However, it cannot steal unremovable buff such as Hakrin’s Increase Max Health.

Overall, Godfery is a decent Legendary hero who is a great addition to building a defensive team for PvP and PvE. To unleash his full potential, provide him with sufficient Focus to enable him to apply his debuff and remove their buffs. Having a high amount of Health and Defense stats increases his survivability against enemy nukes while continuing to support his allies from behind with his trait and abilities.

Ragestasis (Trait → Ascension)
When an enemy gains positive effects from active ability casts, deals 80% damage to them and increases their Ultimate ability’s cooldown by 1 turn. Up to (1 → 2) times per round.

Check out the best build for Godfery with gears and stats!

The recommended stats to prioritize on Godfery are Health, Defense, Focus, and Resistance. Health and Defense enable Godfery to survive a couple of nuke attacks from enemies, Focus allows him to apply his instant negative effect such as reducing enemy ultimate skill cooldown and applying his Defense Down and Unhealable debuffs. Resistance is important to prevent enemies from applying AoE Defense Down with Sundering Purgatory or crowd control abilities like Taunt, Stun, and Frozen. The best gear for Godfery as Crowd Controller & Debuffer is Rebel Set to allow him to stun enemies with his Trait as it deals AoE damage to all enemies whenever they cast an AoE buff spell on their allies. This gives him the opportunity to disrupt enemies’ sequence to prevent them from chain attack. Godfery is an ancient entity known by some as the “wildman” or “wiseman” of Sylvan Forest, respected by beastman and elves alike for his gentle temperament, insight, and the occasional peacekeeper role he has been forced to play between the other races.

Perhaps the enigmatic Godfery was once also like one of the hot-blooded younger races, prone to conflict and to the resolution of disagreements by magical spellcasting, but the millennia have taken away Godfery’s harder edges as he has slowly come to understand the significance and importance of maintaining a peaceful forest and thus has taken upon himself the role of the forest’s secret guardian. and frequent “indweller” of the Starlight Altar.

If any mortal is likely to know of his true nature and origins, it may perhaps be Virgil the Phoenix King who. along with his fellow warriors, was saved from the hands of the dark elves by one of Godfery’s infrequent interventions into the affairs of other races during the terrible elvish civil war around the time of the destruction of their Phoenix Mountain. Godfery acted behind the scenes, recognizing the threat the dark elves and the Chaos Rift posed to the rest of Aurelica, and provided invaluable insights that allowed Virgil to gain the upper hand during the bloody conflict. At most other times, Godfery is more of a neutral arbiter or bystander to conflict unless it impinges on what he regards as the “side of nature”.

Thus, did Godfery intervene during Virgil’s momentous sacrifice to collapse Phoenix Mountain on his own body in a desperate effort to destroy the Chaos Rift and block the demons’ endless access to the Elvish Realm, which he accomplished by helping Virgil complete his inexpertly-woven spell in such a way as to achieve its desired effect. Godfery also assisted Virgil by keeping his spirit back on the mortal plane, thus allowing Virgil’s associate, Mytheasia, the ability to retain Virgil’s essence in physical form, a most unusual feat. Godfery returned, as he always does, after this intervention to his quiet home in the forest, although he has been known to play occasional chess games with Virgil’s spirit from within the Starlight Altar on the occasional visit. Thus Godfery has made only a handful of interventions into the mortal realm over the last millennia, although recent events with the renewed rise of the Dark One and Soulplunder may force Godfery’s hand once more. 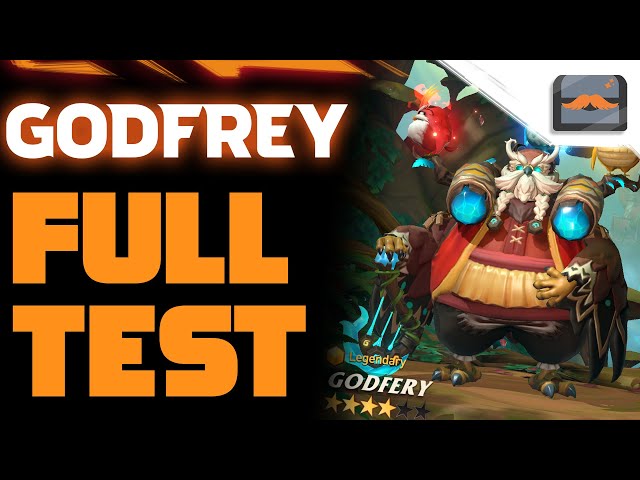