Geironul is a Legendary Offense Fire hero from Free Cities in Awaken Chaos Era. Geironul’s skills revolve around dealing a decent amount of damage both from her single-target and AoE attacks, especially against defensive heroes who lacks Attack stats. In addition, she has a unique trait that enables her to gain a bonus turn to quickly defeat her foes before they have a chance to retaliate and able to increase her buff duration too! Geironul was released on 8th June 2022 along with 2 new heroes who are Darcy and Crixus. She is the second Legendary Hero after Garrell to have their very own Special Summon Banner, which allows players to summon her at a 100% success rate if the first summon pity wasn’t Geironul!

Charge of the Dawn is her basic ability that attacks an enemy and inflicts a No Positive Effect debuff on the enemy to prevent them from receiving any future buffs from themselves or ally while the debuff remains active. This is useful against enemies who specialize in buffing to boost their allies’ offensive or defensive capabilities. However, she requires Focus stats to apply this debuff if you plan to build her as a damage dealer and debuffer role.

Wheel of Fire is Geironul’s special ability that attacks all enemies on the battlefield and simultaneously increases her buff duration by 1 turn. However, she does not apply any buff on herself. Hence, pair her with a support hero who can provide her with some useful buffs such as Yolanda, Windstrex, Brand or Hassel, so she can extend those buff duration to boost her offensive and defensive capabilities slightly longer.

Dawn of Fire is her ultimate ability that deals AoE damage similarly to her special ability but with an additional treatment! It allows her attacks to ignore a portion of the enemy defenses and it scales based on the difference between Geironul’s and the target’s Attack stats. The more Attack stats Geironul has, the higher percentage that ignores defense can become! This makes her skill favorable against defensive heroes, especially in Arena Defense teams that have Wood or Fire Affinity defensive heroes such as Yolanda, Mytheasia, Bruszakk and Brand.

Overall, Geironul is a decent Legendary Fire affinity hero made specifically for Arena since her skill kit does not have any utilities to aid in speed farming Arcane Dominator and No Man’s Land dungeons. The character design gives the players an impression that she is a Light affinity hero as she is equipped in golden armor while wielding a unique golden spear with a bright twinkling light flame. The limitation I notice in this hero is her ultimate ability does not fair well with PvE (player vs environment) content as higher difficulty enemies have all of their stats ramped up (Attack, Defense, Health), which reduces the effectiveness of her ultimate’s ignore defense to take out natural tanky heroes in the game.

Coiled Spring (Trait → Ascension 5)
Grants 1 Rage at the end of the turn plus either an 0%/50%/100% chance of a bonus turn based on the amount of this character’s Rage. Return Rage to zero after triggered. Cooldown: 1 round. (Ascension → Grants Death Immunity for 1 turn at the start of the battle.)
Death Immunity: Health cannot drop below 1.

Geironul was once a mighty paladin of the Order of the Sacred Temple, inducted by baptismal ceremony into her Order by the Sacred Spear as its wielder with the imprint of the Order’s patron, the Divinity of Fire. Geironul is no stranger to the savagery of field, having been rescued by a Temple paladin from her first battle at the age of 10 after which her induction soon followed. It was an era of darkness in which the powers of Chaos seemed on the cusp of prevailing over Aurelica, and during which Geironul solemnly swore to protect her land with all her strength against the Dark.
Geironul fought well, above and beyond the call of duty, but sadly lost her physical body and strength in the battle that claimed her. She should have died, but didn’t. The Sacred Spear provided a passageway of survival. What Geironul found on the other side was not death, but a long slumber in the Void. Geironul felt herself alive a millennia later, strength restored. She immediately knew
why she had been brought back: to guard Aurelica once more. 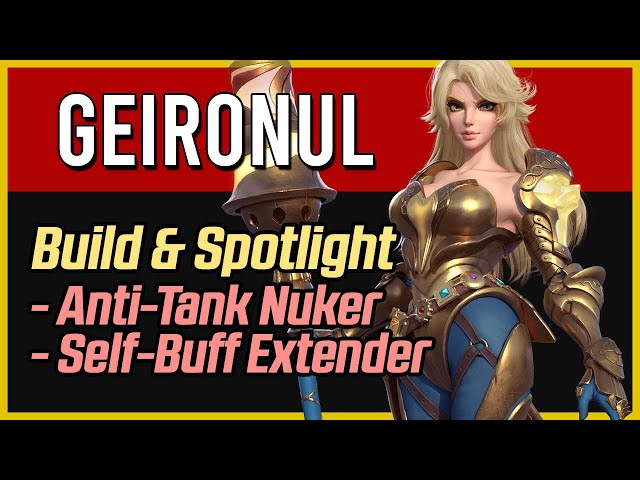