Flarence is a Legendary Support Fire hero from Free Cities in Awaken Chaos Era. Flarence’s skills revolves around buffing her allies and inflicting debuff on enemies simultaneously while performing AoE healing to keep them in the pink of health. She is the very first Fire hero introduced in the game to fill in the lack of Fire healer heroes. Flarence was released on 19th May 2022 with the 300% Summon Rate Up to allow players to obtain her!

Dangerous Dancing is the basic ability that allows her to attack multiple enemies while stripping away their buffs! This is useful against enemies who utilize buff to boost their damage output or their defensive capabilities. For example, stripping away the Attack Up buff from Roaring Tulpa boss and removing the Blessing of the Empress buffs from Queen of Tides boss.

Rhapsody of Return is Flarence’s special ability to heal all of her allies and transfer stats-reducing negative effects to a random enemy. However, there are very few enemy heroes that can inflict that specific type of debuff such as Okubi and Abaddon. Hence, the notable thing about this skill would be the AoE healing on top of her ultimate ability. Nevertheless, she is useful to transfer the Defense Down debuff applied by the minions in Roaring Tulpa.

Rage Bloom is her ultimate ability that applies Bonus Attack buff to her allies while simultaneously inflicting Increase Damage Taken to the enemies so that they will receive the maximum amount of damage from your damage dealers! The Bonus Attack buff works similarly to Cursed Set gear but at a 100% success rate of triggering! Bonus Attack buff can be used to increase the number of Poison debuff inflicted by your Poison heroes (e.g. Santis, Gangelo) to speed farm Arcane Dominator and No Man’s Land dungeons or amplify the damage output by your raw damage dealers (e.g. Garrell, Antinua)

Overall, Flarence is an amazing hero to amplify your team’s damage output against bosses and a decent healer. To unleash her full potential, provide her with a high amount of Health, Focus, Speed, and Defense stats. This is to boost her healing capacity, enable her to apply and transfer debuffs, and to go before her allies to buff them and inflict the debuff. It’s optional to provide her with a Resistance stat to prevent her from being crowd controlled by the enemies. I would recommend equipping her with Revival and Terra Set to allow her to self-sustain against enemies who she is weak at (e.g. Queen of Tides enemies are Water affinity that deals 50% more damage to her).

Lotus Flower (Trait → Ascension 5)
Grants an (80% → 100%) area splash damage and restores (20% → 30%) Lost Health to a team member’s next ability after every 2 basic abilities.
Note: Lotus Flower is a unique buff with a golden frame that is applied to Flarence’s allies even though she is defeated in battle!

Rhapsody of Return (Special, Cooldown: 3 turns)
Heals all team members based on the amount of this character’s Max Health with a 100% chance of transferring any stats-reducing negative effect to a random enemy.
Level 2: Healing is increased.
Level 3: Ability cooldown is reduced by 1 turn.
Level 4: Chance +50%.
Level 5: Healing is increased.

Flarence is the legendary lead dancer of Ruby Tavern, whose extraordinary skills and beguiling beauty has captivated the minds of the islands’ cynics on more than one occasion, particularly during their raucous annual festivals.

Many an unhappy drunk or degenerate gambler has passed a slightly more pleasant time on the pirate island of infamy thanks to Flarence’s presence, which would not be so curious were she not so talented an outlander who seems to be in search of someone or something.

The reality is Flarence is the Mysterious fifth leader behind the Island’s secretive ruling organization: The Hive, and in charge of intelligence gathering. Of course, Flarence is a popular topic of gossip for other reasons too, not least for her enigmatic relationship with the Ruby’s owner, Pluto, which unreliable witnesses have sworn involves late night dances and explains Pluto’s merciless, no-holds-barred treatment of any man that would dare besmirch Flarence’s good name. 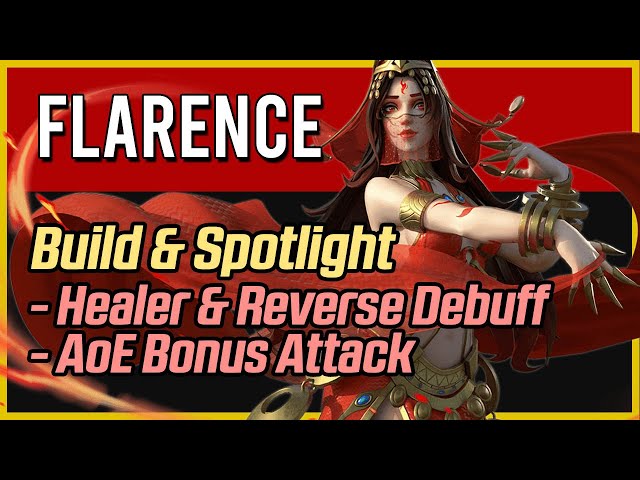